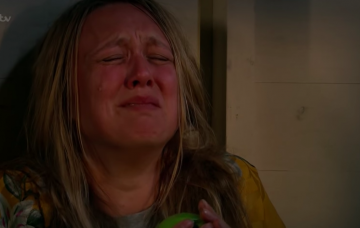 It's a hard life being held captive in a remote shack

Emmerdale viewers have spotted a bit of a blunder with Rebecca White being held captive.

The barmaid has been held captive by her deranged murderous nephew Lachlan after she caught him trying to kill Robert Sudden.

She was knocked out and has spent weeks chained up in a remote cabin relying on Lachlan to bring her food and water.

However, eagle-eyed viewers have spotted a rather large issue for the chained to a post one – she has nowhere to go to the loo.

One wrote: “Where does Rebecca go to the toilet?”

“Where does she go to the loo I wonder?” asked another.

A third added: “So if Rebecca has been chained up for nine days how she been going to the toilet? Maybe she’s wearing a great big nappy?”

However Rebecca probably has more pressing issues as her chances of survival took a tumble on Friday night.

Lachlan decided that he needed to unburden himself of most of the crimes he had committed.

Despite Rebecca begging him not to tell her, fearful that knowing would mean he was more likely to kill her, he wouldn’t shut up.

“Worse than the attic. I feel like i have to tell somebody because do you know what it’s like living with this?

“I killed mum and grandad. Turned the wheel straight into the path of that truck. And Gerry wasn’t an accident either. I killed him too.

“I killed all of them Rebecca.”

Do you think Rebecca will survive Lachlan? Leave us a comment on our Facebook page @EntertainmentDailyFix and let us know what you think!