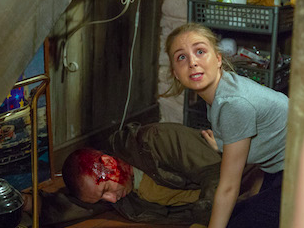 Lachlan's killer secret is going to be exposed but will Belle be his final victim?

Belle Dingle is going to be left terrified next week as Lachlan White kills her brother Sam in Emmerdale.

The beer-making businesswoman is going to finally realise what her evil boyfriend is really capable of when he seemingly commits yet another murder.

Viewers will watch Sam discover Lachlan trying to cover up another of his murders, and be violently attacked.

And now a spoiler clip posted on the soap’s website has revealed that Lachlan may have murdered Sam.

Planning to run away with Belle, Lachlan tells her to get in the car but she stands firm and refuses.

She says: “I’m not going anywhere until I’ve seen Sam.”

But Lachlan then reveals his horrifying crime, telling her: “Belle, I’m not sure you want to see him, not like that.”

Terrified that her older brother has been murdered, Belle questions Lachlan: “Don’t say that, what have you done?”

She then tries to escape, but he grabs her before she can get through the door and drags her back.

And it won’t be a happy ending for anyone as Belle’s own life is soon in danger when when Lachlan forces her to leave the village with her.

She will then wake up and find herself hurt and lying in the road, how did she get there?

Lachlan killed his mother Chrissie and granddad Lawrence in a car crash he caused in January this year.

His fake uncle Terry soon followed, seemingly being buried in the woods.