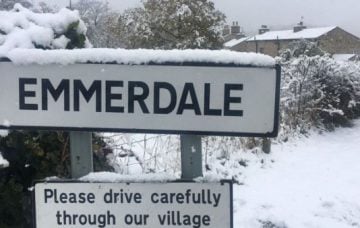 Christmas soap storylines: Everything we know so far

Forget presents, ‘quality’ family time and roast turkey, Christmas is historically a time for divorce, death and drama – in soaps anyway. And this year promises to be no exception… While the channels are keeping their cards close to their chests, they HAVE given us a few clues about that we can expect in their […]

And this year promises to be no exception…

While the channels are keeping their cards close to their chests, they HAVE given us a few clues about that we can expect in their seasonal storylines.

After all, who can forget the fateful Christmas Day when Dirty Den served wife Angie divorce papers in the cruellest possible way.

Thirty million viewers tuned in to EastEnders on 25 December 1986 to see Den punish Angie for lying about being terminally ill.

Meanwhile, in 1987, Corrie fans were left in bits when they said goodbye to beloved character Hilda Ogden.

Emmerdale went big in Christmas 1993 when it killed off four regulars (and a dog) with a plane crash.

Max and Stacey’s affair revealed in 2007, Emmerdale’s 2003 storm which killed Marlon Dingle’s wife Tricia and Kat and Alfie’s wedding are also up there with some of the biggest Christmas plots ever.

So how are BBC and ITV going to top that this year?

The ITV soap have already teased a wedding with a difference…

Executive producer Jane Hudson has said: “We have got a wedding at Christmas. I’m not going to tell you who, but let’s just say it will bring a different flavour to the village than you’ve had before.”

Fans went into speculation overdrive, with our personal faves being Vanessa and Charity. But could it be Chas and Paddy? Or could Ross and Rebecca make it up the aisle before Ross leaves the village?

Could it even be Matty and Victoria who are set to become Mr and Mrs? It would be handy for Vic as she wouldn’t even need to get her bank cards changed!

Jane also dropped some hints about stories coming up in the New Year and said there will be a proposal, a huge shock for Marlon and Paddy, a special female only episode for International Women’s Day and a devastating event for two Dingle favourites.

The ep gave nods to Christmas movies It’s a Wonderful Life and A Christmas Carol, as well as the not-so-Christmassy Groundhog Day as Robert found himself living the same day again and again.

Corrie’s new boss Iain MacLeod – who took over from Kate Oates recently – has revealed that there will be a big shock as well as plenty of Yuletide feeling.

Speaking at a Corrie press event, he said: “Well, the seeds of the stories for Christmas are planted in the big episodes in October, without giving too much away.

“I wanted it to be a Christmassy Christmas. Obviously there’s a history in soap of trying to go and do the Angie and Den Christmas where it’s all acrimony and divorce papers and vitriol.

“That’s not really my preference, when you sit down as you try and digest your stuffing balls and sprouts, you need it to be warm and light-hearted in places and you need it to reek of Christmas.”

But he did tease a “big shock at the end”.

The ITV soap is about to embark on a dramatic stunt week, where Michelle Connor and her two sons are involved in a scary car chase and crash – which will leave at least one of them fighting for their lives.

Spoilers have also told us that Abi Franklin is thrown in jail for the crime.

Last Christmas saw Corrie air some dramatic scenes as Peter Barlow discovered the truth about Billy Mayhew’s involvement in the death of his twin sister Susan.

Fans watched in horror as Peter locked Billy in the boot of his cab and left him overnight, before driving him to the top of a cliff and threatening to let him crash to the bottom.

But when he went back to release him, Billy slipped and ended up falling onto the rocks below, leaving him in a wheelchair for some time.

Will Iain’s eps be able to top that high drama?

The BBC soap is keeping the most tight-lipped about their festive offerings, but we’d be disappointed if it didn’t involve the demise of bald baddie Stuart Highway.

Danny Dyer will be in theatre productions from December to February, and in rehearsals before that, so we’d expect to see him banged up in jail for the foreseeable.

EastEnders fans are convinced that at least one character will be killed off in the Christmas Day special, with Keanu being on the list of possible victims.

It’s only a matter of time before Sharon’s husband Phil Mitchell discovers the truth about the affair – and that would ruin anybody’s Christmas!

EastEnders have a history of killing people off at Christmas, with poor old Fatboy killed in 2015 when the car he was in was crushed.

Derek Branning also met his demise in 2012, when he died of a heart attack in the middle of the Square.

However, she’s returned with health worries… Are scriptwriters warning us it’s time to say goodbye?

Alfie Moon’s return, Hayley giving birth and the climax to Ruby’s consent storyline could also be serious contenders for the festive day special.

Which has been your favourite ever Christmas storyline? Leave us a comment on our Facebook page @EntertainmentDailyFix and let us know what you think!