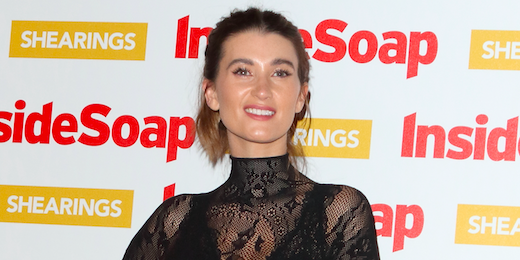 She was forced to defend her son's long hair...

Charley Webb’s eldest son Buster has followed in the footsteps of his younger brother Bowie and had his long hair cut short.

Last month, the Emmerdale actress told her social media followers that son Bowie had had his hair cut short, just weeks after she was forced to defend her sons after trolls criticised their long manes.

Read more: Emmerdale viewers fed up of Charity Dingle as she lashes out at her family

This week, it was Buster’s turn to have the chop, with Charley revealing the finished result to her 366,000 Instagram followers.

The snap showed Buster with his long brown hair cut into a much shorter style, with side parting.

Friends and fans were quick to praise the new ‘do, with co-star Fiona Wade writing: “Beautiful boy!!”

Another remarked on the boy’s resemblance to his mum, saying: “He is so like you!”

A third said: “Wow Buster and Bowie are really starting to look alike I think… You make cute kids.”

“Aww I loved his long hair, but looks fab with this cut too and those eyes,” gushed one more.

But she recently had her domestic bliss ruined when she felt forced to defend herself against internet critics who told her she needed to cut her sons’ hair.

In a lengthy post on Instagram, she lashed out: “I get asked so many times on here why my kids have got long hair. ‘Why don’t you cut it?’ Or, ‘they look like girls’. The answer is really simple, because we like it and more importantly they like it.

“I absolutely don’t feel like I need to explain it to anyone who has an opinion but I just think life would be so much easier if we all just focused on our own lives. Don’t let my kids’ hair worry you.”

She continued: “I think people think they have a right to have an opinion because of social media. Maybe you do. But try keeping it to yourself, it’s not important to us what you think of how our kids look. Or how we look. Or their names or whatever it is you might want to comment on.

“I was always taught, if you’ve got nothing nice to say, don’t say anything at all. Try practicing it peeps. There’s enough awful stuff in the world without being mean to each other.

“They’ve got another t-shirt that says, I’m a boy, I’ve just got better hair than you. True dat.”

Just weeks later, she shared a photo of Bowie sporting a much shorter style.

Charley, who plays Debbie Dingle in the ITV soap, was quick to shoot down suggestions she had had his hair cut because of the trolling, however.

In a video message, she said: “I can’t believe how many people have been asking me if I cut Bowie’s hair because of all the negative comments on Instagram or online.