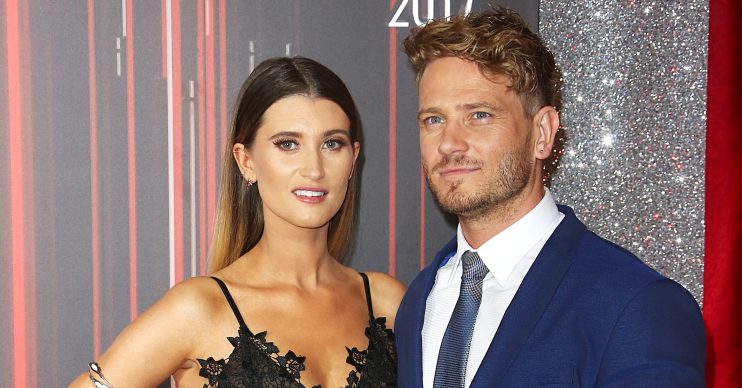 Charley announced the happy news on Instagram on July 29.

The 31-year-old, who married to co-star Matthew last year, posted a black and white picture of the tot.

The baby was dressed in a customised babygrow with ‘Baby Wolf’ across it in the adorable image.

Charley wrote alongside the snap: “BaByWoLf #3 has joined the crazy gang. We’re in a bubble of newborn’ness heaven.”

She and Matthew, 39, already had two sons, Buster, nine, and Bowie, three.

The couple have now revealed to OK! magazine that the tot is a boy, named Ace Gene.

Charley also told the magazine about the newborn’s traumatic birth.

“The umbilical cord was wrapped around Ace’s neck when he was born,” she explained.

“It came off and he was passed to me but I could tell something was wrong.

“Ace wasn’t breathing at first – so the midwife had to press the panic button.”

Matthew added: “By the time someone had come through the door from the panic button being pressed, Ace was breathing again, so it couldn’t have been long. Although it felt like a lifetime.”

SnuzPodSnoozing. That moment after a feed where they settle and have a little sleep✨Up every hour last night to feed, today is a day of doing absolutely nothing. Well….👶🏼👦🏻👦🏼

All’s going well with their son now, apart from him keeping Mummy up for night feeds!

You can read the full interview in this week’s OK! magazine, which is available now.