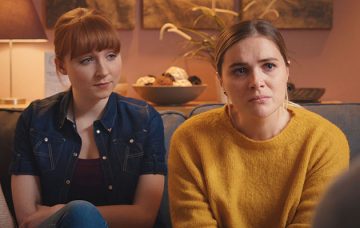 Actress Chelsea Halfpenny has ruled out a return to Emmerdale – but could she be bluffing?

The 27-year-old confirmed earlier this week she has finished up her current role on Casualty as Dr Alicia Munroe.

However, Chelsea – who played Amy Wyatt on Emmerdale for three years from 2010 – has ruled out a return to the ITV show, despite some soap experts suggesting speculation about a soap switch could be true.

The Gateshead actress, whose aunt is telly favourite Jill Halfpenny, told the Daily Star she had no interest in heading back to the Yorkshire Dales to play hard-living Amy.

Stressing she was “definitely” not bound for Emmerdale, Chelsea insisted she had her eye on a different path.

Chelsea reasoned: “There would be no point in leaving one long-running show to go back to the one you were in before. There are other things in my career that I’d like to do. For now, it’s a ‘no’.”

Explaining why she was stepping away from her part as a brilliant medic she has played since September 2015, Chelsea continued: “It’s for similar reasons to why I left Emmerdale.

“I’ve been there for a few years and I just felt like it was time for me to move on and progress. I had a really good time there and I wanted to leave on a high.”

However, a correspondent for Metro.co.uk reckons Amy could show up as Paddy and Marlon travel to Ireland to investigate whether wrestler Bear Wolf is Paddy’s real dad.

And with a producer recently teasing a familiar face could reappear during a jaunt for Emmerdale faves across the Irish Sea, maybe Amy – believed to have fled to Ireland after kidnapping son Kyle – could be making a soap u-turn after all?

I’ll be thrilled if the cast member returning this year is either Amy Wyatt or Alicia Gallagher. Or both.

Emmerdale exec Laura Shaw got fans’ imaginations working overtime when she said: “We’ve got some special episodes coming up where we go out to Belfast. A group of our characters go over to Belfast, and there’s going to be some fun and japes over there.

“What we can reveal is that maybe they’re gonna bump into somebody who was in our village quite a while ago who we’ve not seen for a while. Maybe that person is going to come back with them.”

What do you reckon? Are you convinced Amy could be heading back to Emmerdale? Who else could it be?