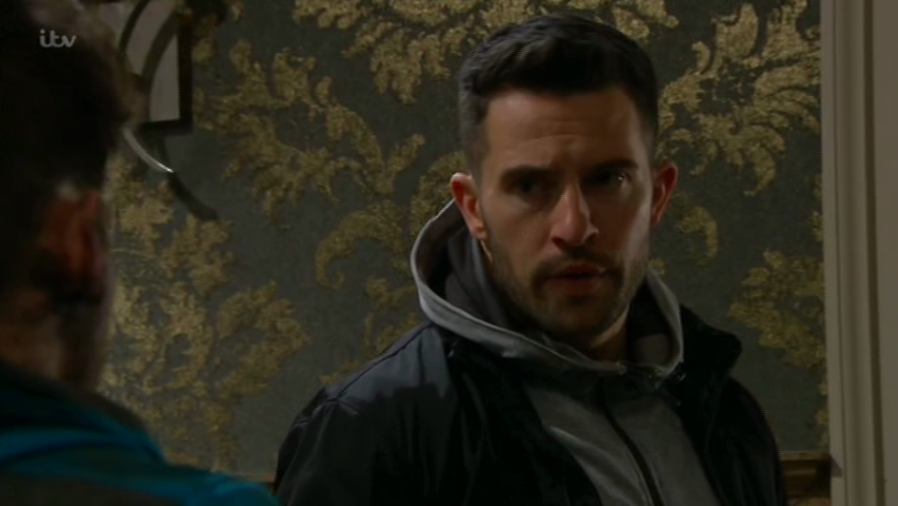 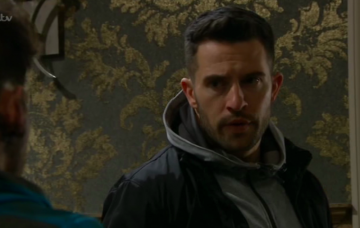 Brooding, bad, and oh so misunderstood

Ross Barton caused drama from the moment he arrived in Emmerdale when he carjacked Laurel Thomas.

After it became clear he knew Cain Dingle, it was soon revealed criminal Ross was Moira Dingle’s nephew from her marriage to John Barton, and it wasn’t long before the rest of that branch of the Barton clan moved to the village.

Petty criminal Ross seemed to want to go straight, but the appeal of being bad was just too tempting.

Billed as a bad boy with a nasty streak, we all knew that softer side was in there and it came out when he fell for Donna Windsor.

He was in the Dales from 2013 until 2018 and it was an eventful five years. Here are the most important bits.

Who are Ross Barton’s family?

Ross is the middle son of James and Emma Barton.

He has elder brother Pete and younger brother Finn, who sadly died in 2017. He also has half-brother Adam Barton, after James had an affair with his brother’s wife, Moira.

Ross’s relationship with his family was always complicated. He was the bad boy, the black sheep, and felt his father loved Pete more than him.

What Ross didn’t know was that Emma, in a fit of postnatal depression had tried to smoother him when he was very young, and Pete had seen it happen and told James.

The incident led to James kicking Emma out and they didn’t see her again until 2015 when Finn tracked her down.

Ross discovered the truth about her trying to kill him, but when she explained about her depression, her forgave her and the pair began building a relationship.

Ross was distraught he didn’t get chance to make up with his dad before his death.

Whilst Ross didn’t set out to be a bad boy, he did do plenty of bad things.

He wasn’t adverse to a bit of violence either, making a pact with Andy Sugden to kill the other’s brother. Ross shot Robert Sugden, but he survived, and Andy failed to go through with his part of the bargain to kill Pete.

There was also a dabble in growing a selling marijuana after he and Finn found plants growing at Wylie’s Farm where their mother had held their father hostage.

Who was Donna Windsor? Was she Ross’s first love?

Donna Windsor returned to the Dales in 2014 after an absence of five years and it was quickly revealed she was dying of terminal cancer.

Ross took a shine to Donna and enjoyed flirting with her and teasing her. He quickly realised she wasn’t the clean-cut policewoman everyone thought she was and in fact she was dodgy.

What she was actually doing was trying to raise enough money to secure her daughter, April’s future after Donna had gone.

Ross agreed to help her burgle Gary North’s house, a prolific local criminal. The robbery was a success and Ross and Donna became lovers, but Donna didn’t tell him she was dying.

Donna helped him out, but it all went horribly wrong and Donna ended up handcuffing herself to Gary and throwing them both off a building to their deaths.

Although he was dating Carly Hope, Ross struggled to fight his feelings for his brother Pete’s fianceé Debbie Dingle.

After weeks of flirting, the pair began an affair and planned to run away together just before Debbie and Pete’s wedding.

But they were stopped by Deb’s dad, Cain Dingle, who revealed Ross was hiding a big secret – he’d bedded Debbie’s mum, Charity Dingle and got her pregnant, making Ross the dad of Debbie’s half-brother, Moses.

Ross escaped and returned to the village to see Debbie’s lifeless body being carried out after the helicopter crash.

He went to the hospital to find out if she was okay, but Pete, who had discovered the truth about the affair, lashed out at him…

Realising he’d ‘killed’ his brother, Pete didn’t go into the hospital for help, he put Ross in the boot of his car and drove him to the woods where he buried him in a ditch covered by leaves.

But it was nowhere to be seen – and fans were stunned to see Ross was alive, but in a coma.

When he woke up he returned to Emmerdale and was furious to see Pete hadn’t been reported to the police even though everyone knew what he’d done.

Ross forgave his brother, but it turned out to be all an act as he spent the next months trying to get revenge on Pete – even making the pact with Andy that they’d kill each other’s brother.

Meanwhile, Debbie had agreed to try again with Ross, but when she found out he’d shot Robert, she left Ross – and the village – behind.

With the amount of women he’s slept with, it’s a wonder Ross doesn’t have more than just one child, but so far Moses Dingle is his only son.

When Moses was born, Debbie and Pete took the little one to live with them as no one knew who the dad was – no one except the dad himself, Ross, who was so determined to keep the truth from Debbie, he went along with Charity’s crazy plan.

It didn’t work when Cain found out the truth and told Debbie, and Ross lost her anyway.

He also thought he was the dad of Rebecca White’s son, Seb, for a while.

But Rebecca soon revealed there was no way it could be Ross’s as they had always been careful, but she and Robert hadn’t.

Joe had initially wooed Debbie, but then revealed he was out for vengeance on her whole family and had left her homeless and jobless.

Ross got a job as Joe’s driver and fed information back to Debbie, but when she wasn’t thankful for his help, he decided the lifestyle Joe was offering him was far more enticing and he was going to throw his eggs into Joe’s basket.

Ross stole one of Joe’s cars in revenge, but he didn’t know Debbie had paid local drug dealer Simon to “mess” Joe up.

Simon, unable to see properly at night and only really focusing on the car, threw acid in Ross’s face, thinking he was Joe.

He discovered Debbie was behind the attack after Simon was arrested, but Ross forgave her for what she’d done.

Ross decided he needed a fresh start in Liverpool. 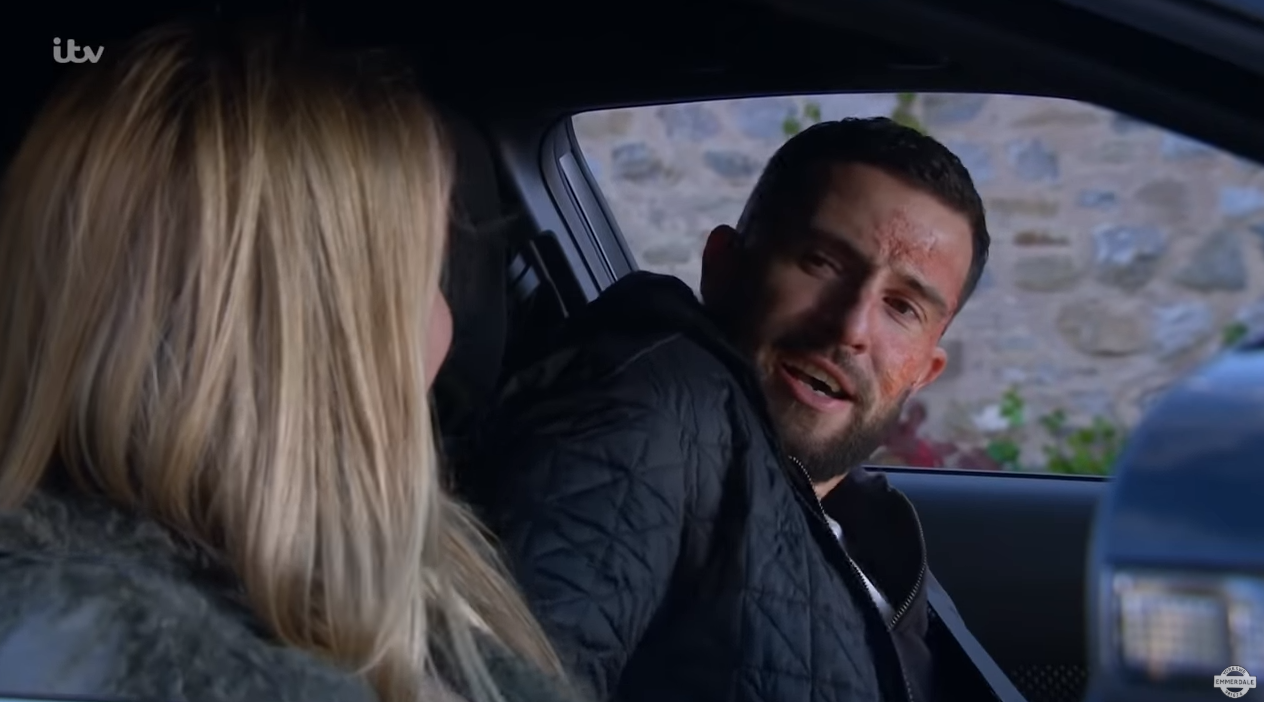 As he departed, he said to girlfriend Rebecca White: “Right, now drive!” showing just how much he’d matured during his five years in the Dales.

Do you miss Ross Barton? Leave us a comment on our Facebook page @EntertainmentDailyFix and let us know what you think!