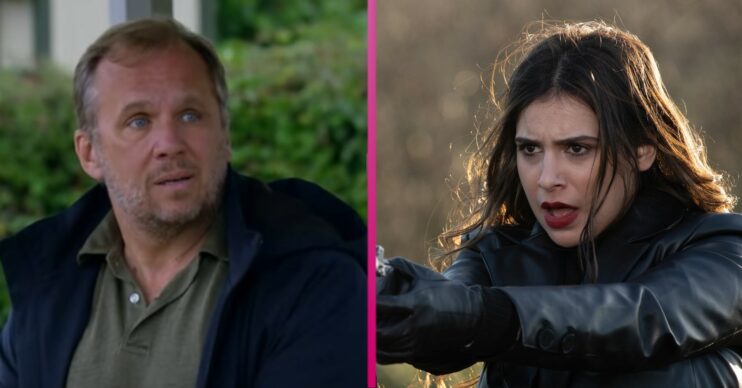 Emmerdale: Will Taylor will be murdered by Meena Jutla, say fans

Will is Dawn's father

Emmerdale fans are convinced Will Taylor will be murdered by Meena Jutla this week as she returned for Billy and Dawn’s wedding.

Meena is back in the village to get revenge on her ex-boyfriend Billy and his now-wife Dawn Taylor.

After the wedding, Dawn was picked up in a limo to go to her wedding reception, but was shocked to see that Meena was driving the vehicle.

Read more: Who is Robert Sugden in Emmerdale and how many people has he killed?

She then tells him to choose who gets shot, him or Dawn and if he refuses to choose, she will kill them both.

However fans are predicting that Dawn’s dad, Will, will be the one who is killed this week.

I think Will is gonna die this week…. It looks like filming for #Lazarus may be starting soon and Dean wants to be a part of it…. #emmerdale

I think will is gonna die by default #Emmerdale

Before joining the Emmerdale cast, Dean Andrews played DS Ray Carling in Life On Mars from 2006 until 2007 and spin off Ashes to Ashes from 2008 until 2010.

Will is gonna die.

Back in 2020, Life on Mars and Ashes to Ashes co-creator Matthew Graham revealed first details about a Life on on Mars revival.

Speaking to Express.co.uk recently, Dean addressed rumours that Life On Mars will be making a return.

He told the publication he had “heard rumours” the series could return, also hinting the people were “in the know”.

“It seems to be something that is still ongoing,” he added.

“And you know if I was a betting man, I might put a couple of quid on it.”

Although Dean has not said if he plans to leave Emmerdale, with Meena back in the village, no one is safe.

Read more: Who is Emmerdale star Roxy Shahidi married to? How many children do they have?