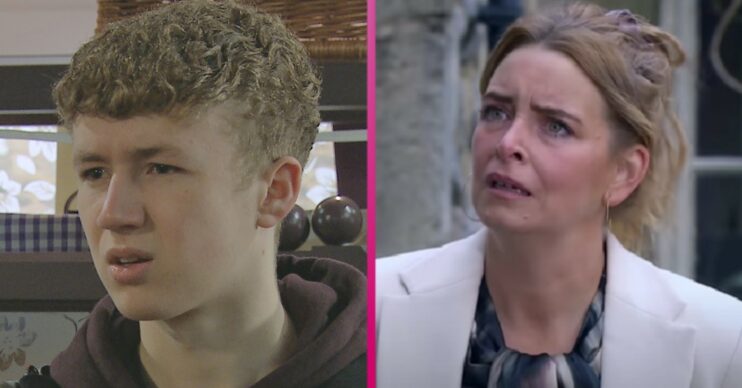 Emmerdale: Will Noah turn on Charity after her shock move?

Will Noah turn against his mother?

Emmerdale’s Noah Dingle was taken in by police after his mum Charity turned him in in tonight’s episode (Friday, May 13).

Noah has been stalking Chloe for weeks and his creepy behaviour was exposed when Chloe found evidence of his crimes.

But will Noah turn on his mother after she broke Dingle code and turned him into police?

Read more: Who is Noah Dingle in Emmerdale? Who plays him and how old is actor Jack Downham?

Emmerdale: Chloe and Charity found out about Noah’s stalking

In this week’s scenes, Chloe and Noah were hanging out together.

But when she found her missing house keys at his house, she became suspicious.

While he was out she went through his laptop and found pictures Noah had taken without her knowing.

She also realised he had been in her bedroom, put a microphone in her room to record her conversations, had been using a drone to spy on her and had been tracking her phone.

When Chloe confronted him, he tried to keep her quiet, but was stopped when Charity walked in.

Chloe was debating going to the police, but Charity begged her not to.

In tonight’s scenes, Charity went to try and destroy Noah’s laptop to get rid of the evidence, despite Paddy encouraging her to do the right thing.

At the scrapyard, Kim found Charity putting the laptop in a car.

Kim began taunting Charity about Noah, but Charity brought up Jamie and everything he did.

Kim told Charity she covered for Jamie the same way Charity is trying to cover up for Noah, but warned it won’t help his behaviour.

She then admitted she wished she did things differently with Jamie and it appeared her words stuck with Charity.

Charity turned Noah into the police

Back at home Noah apologised to his mum telling her he didn’t know what he was doing.

He agreed to apologise to Chloe and told Charity how much he loved her, promising never to let her down again.

But soon police officer Harriet Finch turned up and told Noah he needed to go with her to the station.

On the street, Kim saw Noah being taken by police.

Charity told Chloe and Kerry she reported Noah as she had to punish him.

Kim approached Charity and she told Kim she gave the laptop to the police.

Kim was surprisingly supportive of Charity and told her she should’ve made Jamie face the consequences of his actions, instead of defending him.

But what does this mean for Noah and Charity?

Will Noah turn on Charity?

It has not been revealed what’s next for Noah and Charity.

We know Noah was doing everything possible to avoid being reported to the police, so we can imagine he won’t be happy his own mother turned him into the police.

Could this completely ruin their relationship?

We’ve already seen what Noah’s capable of and that’s only the beginning – could Charity be in danger from her own son?

Charity has also technically broken Dingle code. How will her family react to her turning in her own son?

Is Charity set to be outcast from her family again?