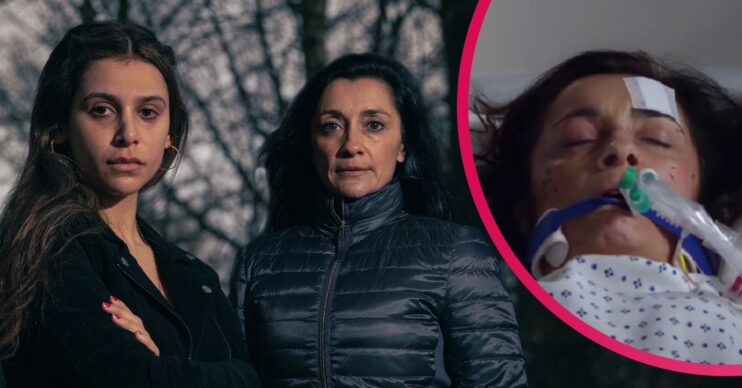 On Christmas in Emmerdale, Manpreet started to realise just how dangerous her sister Meena is.

Serial killer Meena planned to kill her sister with a broken bottle but the Woolpack exploded as they were both in the pub’s garden.

Meena was left with cuts and bruises, but Manpreet was left in a coma.

Meena wanted her sister to die in her sleep, otherwise she planned to kill her herself.

In tonight’s episode (Monday, December 27) Manpreet’s ex and local vicar, Charles, prayed for Manpreet and she soon woke up.

However as soon as she saw Meena, her heart monitor went off and it looked like she was terrified to see her sister.

Later, Meena planned to inject a fluid into Manpreet’s IV drip but she woke up.

Manpreet began to ask Meena what happened and it seemed she had no memory of what happened before the explosion – including speaking to Nadine’s sister Carol who thinks Meena is a killer.

Meena left the room to get Manpreet a drink, but when the nurse came in he said Meena told him how close they are and about how she broke her arm when she was little.

Manpreet sighed and he told her it was okay if she didn’t remember and it will come back to her in time, but Manpreet said she didn’t need time and that she remembers everything about her sister.

Will she expose her as a killer? Has she managed to convince Meena she doesn’t remember anything?

Emmerdale: What’s next for Meena and Manpreet?

Emmerdale has revealed that Meena holds her sister captive and makes sinister plans to end her life.

Will Manpreet be able to expose Meena or will she be her sister’s next victim?

Spoilers: Vinny get closer to the truth?

In upcoming scenes Billy tells Vinny that Ben was convinced that the survival challenge accidents weren’t accidents, due to the footage recovered from the body cam.

Vinny begins to investigate, but will he get to the truth?