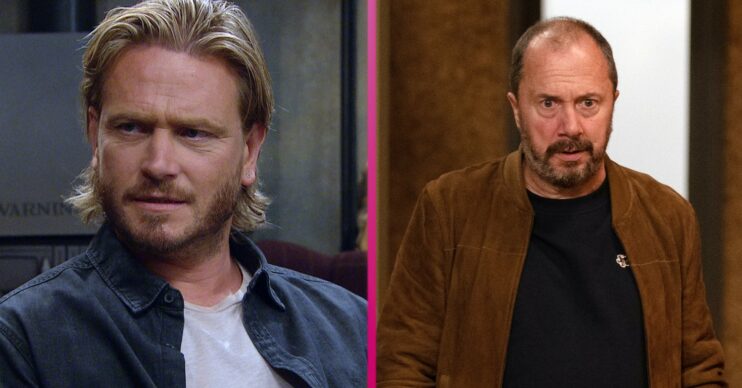 Emmerdale: Will David die after being shot by Russ?

In tonight’s episode of Emmerdale (Friday, September 10) it was revealed David was the one who was shot by Russ.

Earlier this week, Victoria agreed to send Russ the money his mother left Harry in her will to help with his financial troubles.

However Wendy felt bad for convincing Vic to send Russ the money and went to The Hide to tell Vic the truth.

She explained that Russ was blackmailing her – he threatened to expose that she wasn’t a qualified nurse if she didn’t help him get the money.

Russ soon arrived and pulled a gun on both Wendy and Victoria.

He forced Vic to open the money in the safe in the office. However Vic noticed David’s phone and hid it, as David his under the table.

Read more: Emmerdale: Colin Baker to make an appearance in the soap

Back down in the Hide, Russ forced Vic to transfer the money over, meanwhile in the office David rang Jacob and asked him to call the police.

Russ soon heard David’s phone go off and went up to the office, threatening to kill Vic if he didn’t come out.

Soon David was taken hostage with Vic and Wendy. He warned Russ the police were on their way and tried to convince him to let them all go.

However when one of the phones rang, Victoria went to attack Russ and David followed.

Soon a gunshot could be heard from outside The Hide.

In tonight’s episode it was revealed David was shot. Soon Victoria was able to knock Russ unconscious and Wendy went outside to get the police.

Soon David was taken to hospital, while Jacob was worried, Wendy tried to assure him there’s a chance he would be okay.

Later in the hospital, Eric met Jacob and Victoria and poor Jacob broke down in tears saying he couldn’t lose his dad, but will David survive?

It’s not yet been revealed if David will make it. However recently Matthew Wolfenden and Isabel Hodgins were spotted filming scenes together.

Could David end up pulling through?