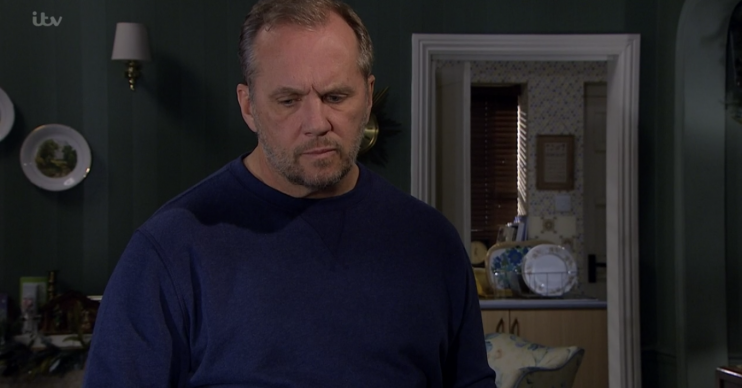 Emmerdale viewers slam Will as he betrays Cain to DI Malone

Cain had tried to save him but Will refused his help

Will Taylor has sickened Emmerdale fans by betraying Cain Dingle to DI Malone.

The mechanic turned on his friend and boss for the blackmailing police officer in last night’s episode (April 3).

Viewers know Will has continued to carry out corrupt Malone’s bidding – including drugs smuggling across the border, but Cain and Billy had no idea he had carried on.

However last night, Will’s problems mounted up and Malone confronted him about lying about Cain and Billy’s involvement.

Visiting him in the village, Malone made it clear he wanted to meet all three of them before his next big job, leading to Will suffering a panic attack.

And when Billy found him in a state in the garage, he struggled to get him to calm down and ended up telling him about Cain’s insurance policy against the cop.

Cain and Billy conspired to keep the blood-stained car Malone had used in an armed robbery, so they would have a way out of the mess.

However, Will had other ideas and took the car straight to Malone.

When he discovered what had happened, Cain told Billy that Malone had just “signed all of their death warrants.”

Fans were sickened by the betrayal with one saying: “Will the traitor #Emmerdale.”

A second said: “‘He just signed our Death Warrant’ Will really is just that [expletive] stupid #Emmerdale.”

A third said: “Why the hell would Will be so stupid as to actually take literally the only I insurance Cain actually had against Malone? #Emmerdale.”

Will Cain be killed off?

Actor Jeff Hordley recently admitted that he doesn’t know if this is a fight Cain can survive and that he may even be bumped off in the soap.

Speaking to ED! and other media at a recent press event, he said: “Whatever hurdle Cain is trying to get over there is always another one Malone will throw at him.

“I don’t know if the story pushes forward with other characters or whether I carry on with it.

“Jane is secretive about where stories are going otherwise it’s like Chinese whispers around the cast. It’s savvy.

“I’ve enjoyed playing Cain it’s been a huge part of my life. I’m very close to him and protective over him.

“But inevitably there will be a day where the script writers or the producers say it’s the end of the line.”