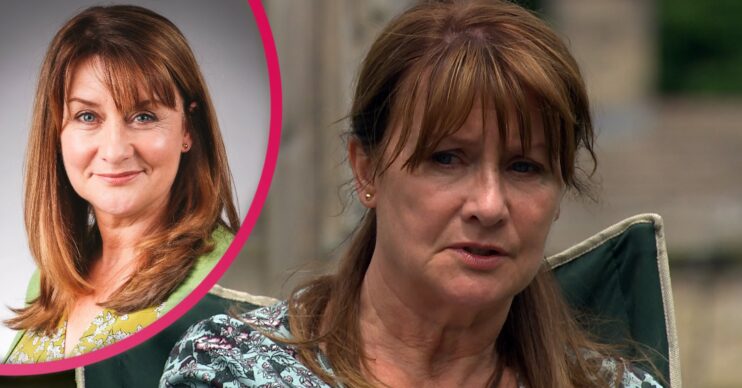 Since Wendy Posner turned up in the Yorkshire village of Emmerdale there’s been plenty of unfolding drama for her and her murdered son Lee.

But eagle-eyed fans of the show may notice she’s somewhat recognisable from somewhere else.

Let’s just say this isn’t actress Susan Cookson’s first soapland rodeo. But where is it you know her from? Let’s find out…

Who is Susan Cookson and what do we know her from?

You may know her best as Wendy, but Susan has had a string of acting jobs on big-name shows throughout her career.

Read More: Who is Russ in Emmerdale? Where have you seen actor Rob Jarvis before?

She used to play fan favourite, Maggie Coldwell, on BBC drama Casualty, crossing over to sister show Holby City for a stint too.

She’s also had parts in Hollyoaks where she played Janet the Prosecuting Counsel at Amy Barnes’ murder trial.

It’s also not the first time Susan has been in Emmerdale – she previously appeared as police officer DI Judy Dove, last seen in the Dales in  2003.

She then made her way into Coronation Street where she starred as  Callum Logan’s mother Marion. The role has since been recast.

She also had brief stints at Waterloo Road and in hit ITV relationships drama Cold Feet before returning to Emmerdale in 2019.

Is Susan married and does she have children?

Susan was married, but sadly her husband Malcolm Scates passed away on September 6, 2016. At the time they had been married for 23 years. They had two children together, Ruari and Dan.

Malcolm was also an actor and starred in shows including The Inbetweeners, Waterloo Road and The Wolfman.

What’s next for Wendy Posner?

This week Wendy is shaken to find Russ on her doorstep. He is angry about his mother’s will after she left everything to Victoria’s baby Harry and demands they talk.

Meanwhile, oblivious Bob is excited for his evening with Wendy, but she is clearly anxious about Russ – her abusive ex-husband.

As his shady past comes to the surface Russ demands she get his inheritance back.

Not knowing where to turn a traumatised Wendy introduces Russ to Victoria as Harry’s granddad.

Russ then claims he wants to be a part of Victoria and Harry’s life. Feeling trapped, Wendy backs him up.

Subsequently, Wendy covertly begs Russ to stay away from Victoria and promises she’ll get him the money. He however piles the pressure on saying he doesn’t have time.

He then makes threats against her and Victoria and Wendy feels powerless to stop him as he continues to play the doting granddad.