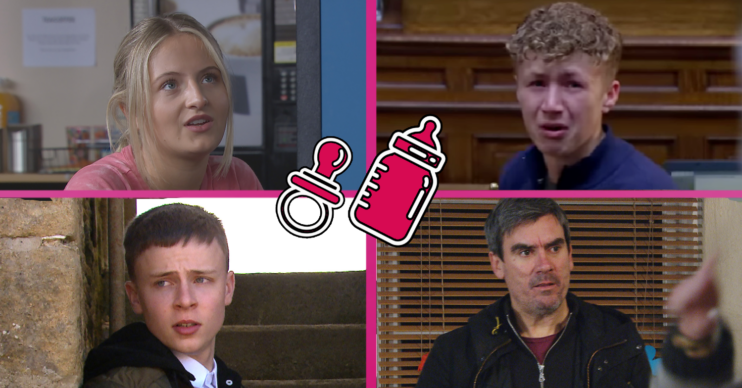 Emmerdale: Who is the father of Amelia Spencer’s baby?

Amelia got a huge shock

Emmerdale teen Amelia Spencer got a huge shock when she found out she’s pregnant tonight.

The 15-year-old has recently been taking weight syrup and in Thursday’s episode of the ITV soap (July 21) she collapsed whilst holding baby Thomas.

At the hospital she was told she is pregnant, but who is the father?

Read more: Emmerdale in 2022 – Who’s leaving and who’s arriving in the village this year?

Over the last few months Amelia has been struggling with body image and began ordering a weight syrup.

She also developed a crush on Noah Dingle. But after he used her to make his ex-girlfriend Chloe Harris jealous, he said some nasty things to Amelia.

In tonight’s episode she was asked to babysit Gabby’s son Thomas and Dawn’s son Lucas while they were both at work.

However Amelia ended up fainting with Thomas in her arms.

At the hospital she lied that Thomas hadn’t been strapped into his high chair properly by Gabby and he fell out.

But when Lucas told Kim that Amelia fell holding the baby, she confronted Amelia.

Dan wanted to know what was causing Amelia to blackout and she admitted she had been taking weight syrup.

Dan was adamant she get checked over. But the doctor revealed to Amelia that the reason she had been passing out and feeling nauseous was because she was pregnant.

Emmerdale Amelia: Who is the father of her baby?

The pregnancy came as a shock to viewers as well as Amelia.

We have no idea how far along into the pregnancy Amelia is, but it was announced earlier this year that a baby would be born during the soap’s 50th anniversary in October 2022.

It is unsure if Amelia’s baby is the baby that will be born during the anniversary week.

But what we all want to know is, who is the dad?

We know Amelia had a crush on Noah and he was planning on getting her drunk to sleep with her to make Chloe jealous.

However his plan was exposed before Amelia went home with him.

He’s been in prison for the last few weeks, but could he have slept with Amelia before going inside?

Emmerdale teens Amelia and Samson grew close and he eventually admitted to her that he had feelings for her.

However she rejected him.

Again, it is unknown if they did sleep together, but we know they have spent a lot of time together recently.

Heath is another one of Amelia’s friends. The two don’t appear to be close or seem to have any sort of romantic connection, so it seems unlikely.

Could she have turned to Heath after Noah cruelly rejected her?

We know that. in the past Cain has taken revenge by sleeping with a teen. He wanted to punish his ex lover Angie Reynolds by grooming her 16-year-old daughter Ollie Reynolds and sleeping with her.

Recently Cain expressed how he regretted his actions, but we know Cain acts on impulse when angry.

Al Chapman is the village lothario and has bedded many women in Emmerdale.

He is currently in a relationship with Kerry Wyatt, who is a mother figure to Amelia.

However he has been cheating on Kerry with Chas Dingle.

When he found out about how Noah treated Amelia, he made sure to let Noah know he wasn’t happy.

Could he have comforted Amelia and it gone too far? Could he be the father?

It is also possible that the father is someone we haven’t seen yet.

She is a teenager and most likely has friends outside of the village.