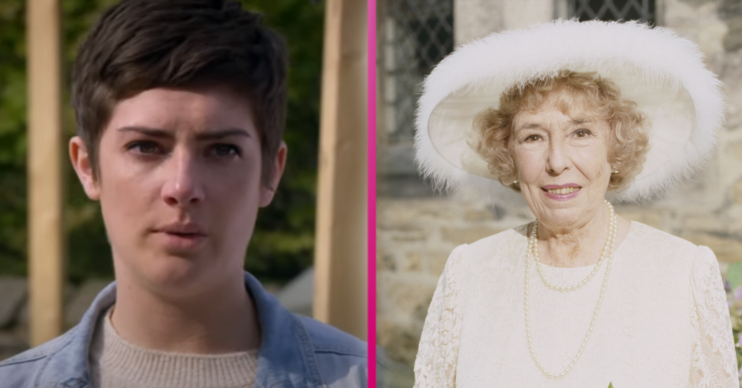 Annie is a big part of Emmerdale's history!

In tonight’s episode of the ITV soap (Friday, August 28) Victoria received a call from Diane. She was given the sad news that her grandmother, Annie, has died.

Annie, played by the late actress Sheila Mercier, is a legend in the Emmerdale village. But for those new viewers, here is a recap on who Annie is.

Emmerdale: Who is Annie Sugden?

Annie was one of the soap’s original characters. She appeared in the very first episode of Emmerdale Farm in 1972.

She is the mother of Joe and Jack Sugden and grandmother to Andy, Robert Victoria Sugden and Sam and Sally Skilbeck.

Annie appeared on and off from 1972 until her final appearance in 2009.

What Emmerdale storylines was Annie involved in?

During her time on the soap, the character Annie had numerous storylines. She was widowed twice and had to deal with the deaths of family members.

In December 1993, Annie was involved in the famous storyline which saw a plane crash into Emmerdale (which at the time was known as Beckingdale village).

At the time of the crash, Annie and husband Leonard were heading to the airport to go to Spain. They were being driven by Annie’s son Joe.

But as they were leaving, a piece of wreckage hit Joe’s car and, as he swerved, he went into a ditch.

Leonard suffered head injuries and died. Annie was left in a coma for three months but survived.

Although she hasn’t returned to the village in over a decade, she has been mentioned many times by her family and friends.

Last year, Victoria was raped by Lee Posner, she and Robert went to visit their grandmother.

Actress Sheila Mercier played the role of Annie. The actress died last year in her sleep at the age of 100.

After the news broke, her co-stars paid tribute to Sheila.