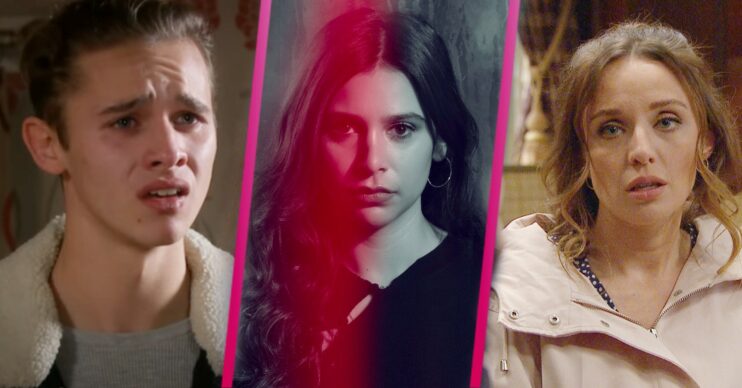 Emmerdale: Who does Meena kill? New trailer reveals a lot of potential victims

Emmerdale has confirmed that Meena Jutla is set to kill someone next week, but whose life will she take?

Meena arrived in Emmerdale last year as Manpreet’s secret sister. However it looks like things are not all as they seem with her.

Recently Emmerdale has released a trailer called M is for Murder, teasing what’s to come for Meena.

It looks like there are a bunch of different people who could be on her kill list, but who will meet their end?

Emmerdale: Who will Meena kill?

Jacob recently returned from Portugal, where he has spent the last six months.

However Meena was not happy with Jacob’s return, as it took David’s attention away from her.

As David has told Meena, who he is dating, that she can’t move in for a while due to Jacob’s return she has become increasingly annoyed with Jacob’s presence.

This week, she plots to get rid of Jacob by making it look like he stole the Pride collection tin, but when that plan backfires, she learns Leanna’s plans to go travelling.

She soon begins plotting to get rid of Jacob.

In the trailer it also becomes clear the two will never see eye to eye. Will she go as far as to kill him?

Leanna is Jacob’s ex-girlfriend. The young couple recently split up, but it’s become clear that Jacob still has feelings for her.

In the new M is for Murder Emmerdale trailer, Meena can be seen telling Leanna: “I’m very loyal to people who put their trust in me, but as an enemy, you really don’t want to go there.”

Would Meena go as far as to hurt Leanna to get to Jacob?

This week, Victoria and Meena’s boyfriend David bond over their children.

Viewers know Meena has a jealous streak. Could she end up going after Victoria?

Although it seems more likely she’d go after Victoria, will she end up killing David?

As we know, Meena and her sister Manpreet haven’t always had the best relationship, however in the last few months the two seem to be getting on better.

Manpreet and Meena often end up clashing and falling out. Could Meena go too far and kill her own sister?

After discovering Manpreet still had feelings for her ex-fiancé Charles, she was rooting for them to get back together.

However when she discovered Charles was now dating Andrea Tate, she tried to drive them apart.

Would Meena kill Charles as revenge for not getting back with Manpreet?

Meena has started to see Andrea as an obstacle for Manpreet and Charles to get back together.

Viewers have seen Meena go to extreme lengths already to try and pull the new couple apart. Will she commit murder to get what she wants?

Even actress Anna Nightingale, who plays Andrea, has revealed that everyone in Emmerdale should fear ‘unhinged’ Meena.

A few weeks ago, Meena opened up to Diane about a friend of hers who took her own life.

Meena begged Diane to keep what she told her to herself.

Later Meena was looking at an article clipping about her friend, Nadine’s death.

Another section of the article read: “Nadine Butler, aged 22, was found dead in her car yesterday after inhaling carbon monoxide fumes. Police suspect foul play and are appealing for witnesses.”

Could Meena regret telling Diane about Nadine and go after her?

In the new M is for Murder trailer, it looks like Diane’s granddaughter Gabby could also be on Meena’s list.

In the trailer, the pregnant teenager turns around and looks terrified. Has she managed to get on Meena’s bad side?