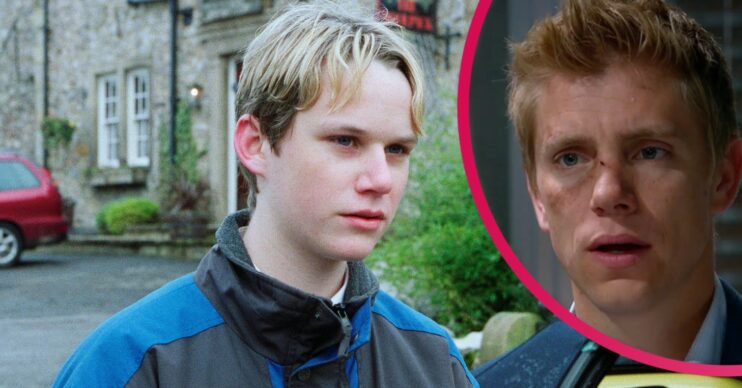 If you’re an Emmerdale fan you’ll be well aware that Robert Sugden has had his fair share of trouble – and actors, including Christopher Smith.

Jack and Pat’s wild son has been portrayed by four different cast members since he was first introduced in 1986.

The most recent incarnations of the role include efforts by Ryan Hawley for five years prior to his exit in 2019 and Karl Davies who took on the role between 2001 and 2009.

But the longest-running Robert was child star Christopher Smith who played him for 11 years.

Christopher was just four years old when he joined the show in 1989. However, his childhood dreams of stardom were eventually shattered.

Emmerdale: What happened to Christopher Smith?

The actor – now 36 – exited Emmerdale in 2001 after show producers decided it was time for more adult storylines. They decided an alternative actor would be more suited to the role for his teenage years.

Christopher however didn’t go without a fight and sued Yorkshire Television for unfair dismissal.

It’s been reported that Christopher now lives in Los Angeles in the USA.

The former soap star is thought to be a producer on popular AMC show The Talking Dead which focuses on in-depth analyses of hit zombie apocalypse series The Walking Dead.

Christopher did however briefly return home to Bradford in 2012 when he married his fiancée Sarah at Bolton Abbey. The couple have a five-year-old child.

Emmerdale: Where is Robert Sugden now?

Robert was last seen on our screens in 2019 when he was sent to prison for murder.

He was sentenced to 14 years behind bars for the attack on car salesman Lee Posner.

Read More: How many kids has Leyla Cavanagh got in Emmerdale? How many times has she been married?

Posner had raped Robert’s sister Victoria and refused to accept responsibility for his crime leading to Robert attacking and hospitalising him in retaliation.

When Lee ultimately died, Robert was put on trial and given the lengthy sentence after pleading guilty to the crime.

It is as yet to be seen if he will ever return to Emmerdale.

Emmerdale currently airs Monday to Friday at 7 pm on ITV with an extra episode on Thursdays at 8 pm.

Which actor was your favourite Robert Sugden? Let us know by heading to our Facebook Page @EntertainmentDailyFix and leaving a comment!