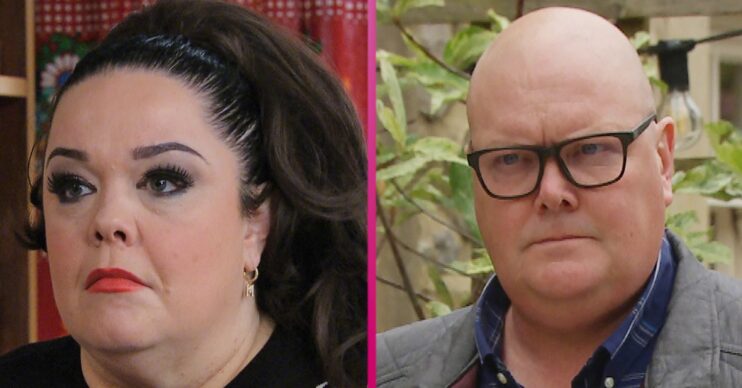 Emmerdale: When were Mandy and Paddy married? Why did they break up?

Mandy and Paddy were married many years ago

Emmerdale characters Mandy and Paddy were once married, but when did they have a relationship, why did they break up and could they get back together?

This week Mandy was devastated when she learnt her son Vinny and his girlfriend Liv eloped. Mandy thought Vinny didn’t want her there as he didn’t see her as his real mum.

They planned to have a wedding reception and invite Mandy as their guest of honour.

In tonight’s episode (Thursday, March 10) Paddy went to see Mandy to convince her to come to Liv and Vinny’s wedding reception.

He reminded her that his mother nearly ruined their relationship with her interfering.

Mandy said Paddy’s mother saw her as someone who would let him down and Paddy pointed out she did have an affair.

But when were Paddy and Mandy married and what really broke them up?

Emmerdale: When were Mandy and Paddy married?

Mandy arrived in Emmerdale in 1995 to live with her uncle Zak after being disowned by her dad Caleb.

In February 1997 Paddy arrived in the village and Mandy fell in love with him.

But when Mandy’s cousin Butch overheard Paddy ridiculing their family he told Mandy and she ordered him out of their house.

Paddy was offered a job in Ireland and left for a short period of time before returning.

Mandy and Paddy reconciled after he apologised to the family.

Paddy’s mother Barbara disapproved of Mandy and was convinced she’d just make Paddy miserable if they got married.

She paid Mandy to marry her cousin Butch, who was in love with her, and they did marry in November 1998.

However Mandy was unable to ignore the fact she loved Paddy and the two began an affair. When Butch found out about their affair, he was furious and the Dingles disowned her for her infidelity.

Following her divorce from Butch in 1999, Mandy and Paddy got married.

Why did Mandy and Paddy split up?

Paddy was devastated and ended their relationship and Mandy left the village.

She briefly returned in 2001 to try and win Paddy back but she realised he was now happy and in a relationship with Emily Dingle, Butch’s widow.

Mandy left again and didn’t return until 2019, when she arrived with son Vinny.

At the time of her return in 2019 it was speculated Vinny was Paddy’s son, but as time went on we learnt Vinny was the son of a man named Paul Ashdale.

Mandy isn’t Vinny’s biological mother, but she has raised him as her own since he was 9 months old.

Will Mandy and Paddy get back together?

In the past Lisa Riley has stated that Mandy wouldn’t want to split up Paddy and his wife Chas, who is Mandy’s cousin.

Recently Lisa explained Mandy and Paddy’s friendship and teased there is heartbreak coming for the Dingle family.

Speaking about Mandy’s upset after finding out Liv and Vinny married in secret she told Entertainment Daily and other media: “Mandy’s oldest oldest oldest best friend sorts everything out and we’re going to be playing a lot of lovely stuff.

“It’s Paddy who makes her realise that actually when they were kids and they were same age they were exactly the same as Liv and Vinny.

“Paddy is the ultimate hero of the day. She continued: “He reminds Mandy of a few home truths.”

Lisa later teased: “I’ve mentioned about Mandy and Paddy. You can have two characters who were married who are the best of friends. It’s a deep-rooted loyalty and trust that Mandy and Paddy have.

What is going to happen?