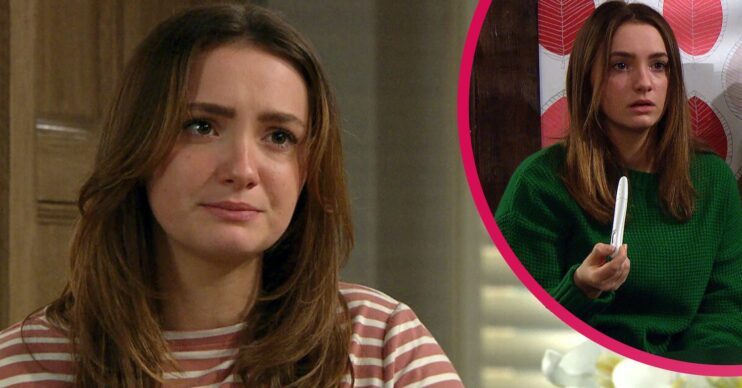 Emmerdale: When is Gabby’s baby due?

It feels like Gabby Thomas has been pregnant with Jamie Tate's baby forever...

Emmerdale teen Gabby Thomas seems to have been pregnant for a very long time.

Fans on social media have picked up on her lengthy gestation period and have begun commenting that she’s been carrying her baby for what feels like forever.

But just when is Gabby’s baby actually due?

When is Gabby’s baby due in Emmerdale?

Read more: Emmerdale: Is Victoria’s behaviour as bad as Meena’s?

Gabby, and the viewers, have known of her pregnancy since very early on.

She had a one-night stand with Jamie Tate at the end of January and discovered she was expecting his child two weeks later in mid-February.

That means her end of October due date is imminent – she’s almost 40 weeks pregnant and is likely to give birth really soon.

In Soapland, lots of babys are born very early, so it’s possible Gabby’s pregnancy feels so long because she’s gone to full term.

In fact, in real life, only about four percent of babies arrive on their due date. One in five babies are born at 41 weeks or after – so Gabby could still be pregnant for a few weeks yet!

Who is the father of Gabby’s baby?

Gabby’s baby daddy is Jamie Tate, who is currently missing. Gabby – and most of the village – think Jamie is dead, but Kim is convinced her son is still alive and has been sending her signs.

Jamie initially wanted Gabby to have an abortion – to him it was just a one-night stand. However, Kim was thrilled to hear she was going to be a grandma again and invited Gabby to move in to Home Farm.

Gabby decided to keep the baby and Jamie was furious, although he did eventually agree to financially support his son.

Last month, Gabby wanted to elope with Jamie for financial reasons, but Jamie wanted to run away with ex-girlfriend Dawn.

Dawn said no and Jamie decided to leave the village. Gabby was calling his mobile, and as Jamie declined her call, he swerved on to the wrong side of the road, almost hitting Chas Dingle coming the other way.

Jamie crashed through a fence and drove his car into a lake. When the car was pulled from the lake, Jamie was not inside.

This week, Gabby is planning to flee the village with her gran, Diane.

Kim is getting a little too ruthless over plans for Gabby’s baby. She wants her to draw up a will giving Kim sole parental rights to the child should anything happen to Gabby.

Seeing how Kim is also behaving over the custody battle for Jamie’s daughter with Andrea, Millie, Gabby is feeling really uncomfortable.

Meanwhile, Diane is also frustrated by her own situation and wants to leave for Portugal with Gabby.

Bernice eventually decides to go with them too. But can they keep it a secret from Kim and get away without her realising?