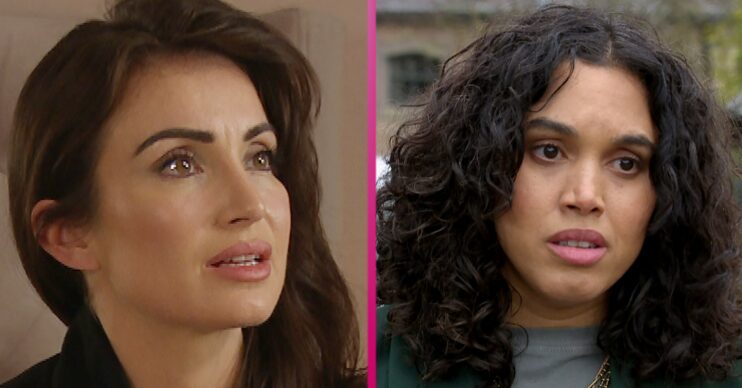 Emmerdale: What’s next for Leyla as Suzy drops a huge bombshell?

Will Leyla quit too?

Emmerdale character Leyla has secretly been doing cocaine with Suzy over the last few months.

However when Suzy told Leyla she wanted to start living a cleaner life, she left Leyla worrying about where she would be getting her next fix.

What’s next for Leyla? Will she come clean to her husband Liam about what she’s been up to?

However it soon became clear that Suzy knows Leyla Cavanagh.

Viewers found out Leyla and Suzy have been doing cocaine together.

Last week, Leyla and Suzy had a meeting with Moira to discuss using her barn for weddings.

But when Suzy found out Holly Barton, who died in 2016, was Moira’s daughter, she became panicked and made her excuses to leave.

Later Suzy confessed to Leyla that she knew Holly as Holly photographed some weddings she planned.

On Suzy’s birthday, she became tied up with work and asked Holly to buy cocaine off her dealer for her birthday celebrations.

However when Holly bought heroin, Suzy was furious and had a go at her.

That night Holly returned home, but the next morning Moira found her daughter dead in her bed.

When Suzy found out Holly died the same day she gave her money to buy the drugs, she felt terrible.

When Suzy found out Leyla told Vanessa about her and Holly’s friendship, she was upset she lied to Vanessa and tried to end things.

But later in the pub, Suzy told Leyla she was going to start living a cleaner life and Vanessa comes first.

As Suzy told Leyla they need to lay off the partying, Leyla looked worried, wondering when she was going to get her next fix.

What’s next for Leyla?

This week Leyla suggests to Suzy and Priya that they come over for brunch and a team building exercise.

However Suzy is suspicious of Leyla’s tactics.

With Holly’s overdose still playing on her mind, alongside her relationship with Vanessa, Suzy tells Leyla she is serious about staying off cocaine.

Leyla is secretly alarmed, especially when Suzy tells her they should both quit while they’re ahead and tips the remains of the cocaine down the sink.

Emmerdale usually airs weeknights at 7.30pm on ITV, with an extra episode at 8pm on Thursdays.