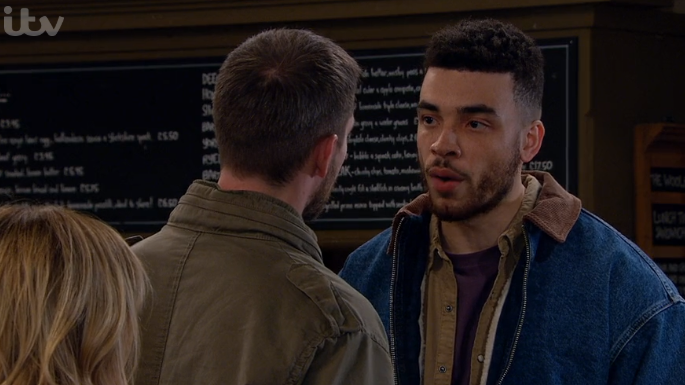 There's even a theory linking him to Joe Tate!

Fans of Emmerdale know Moira Dingle has been having an affair with Nate Robinson for months behind her husband Cain’s back.

However, since his arrival, fans have suspected there is more to newcomer Nate than just a randy farmhand.

They’ve come up with many different theories about him and if he really is who he says he is. Clue: he’s almost certainly not!

Recently, Sally Dexter, who plays Cain’s mum Faith, confirmed that there is an identity twist with Nate.

A popular theory is that Nate is actually Cain’s long-lost son.

Cain had his first child, a daughter called Debbie, when he was a teenager.

He is also father to Kyle and Isaac.

It’s possible, though, that Cain fathered another child before he even came to the village back in 2000.

Perhaps it’s a child even he doesn’t know about…

what is it with Nate & Cain? Nate seems awfully interested in Cain. is he Cain's son? #Emmerdale

So will it turn out Cain is Nate's dad after all & He's been told so & so about Cain from his mum ?? #Emmerdale

I remain convinced that Nate has to be connected to Cain in some way, like a long-lost son. It's the only soap way I can make this weird affair storyline make sense #Emmerdale

Another popular theory was that Nate is actually Cain’s nephew – son of his half-brother Nathan.

Nathan Dingle is the son of Zak and Nellie Dingle and has been estranged from his family ever since they ruined his wedding by starting a huge fight.

He has been mentioned over the years but never actually been seen.

Some fans think that Nate could be Nathan’s son sent to get revenge.

In a Digital Spy forum, one wrote:  “Nate is certainly being very manipulative, and is just basically using Amy and wants to hurt and harm Moira and Cain’s relationship.

“It just comes across as having more to it than him only wanting to get into Moira’s overalls.”

A second said: “Cain has a half-brother Nathan who is estranged from the Dingle family. He’d obviously be too old to be Nate, but maybe Nate is Nathan’s son?”

Nate’s been hired by Kim Tate

Another interesting theory is that Kim Tate hired Nate in an attempt to destroy Moira and Cain’s marriage.

Viewers will remember when she came back to the village earlier this year she vowed revenge after Cain refused to sleep with her.

Some viewers think that Kim hired Nate to split up Cain and Moira.

I think there will be a twist to the Moira and Nate affair in #Emmerdale maybe Kim is paying Nate and it's part of her plan to get the farm so I think #Coira will be fine after it.

Nate is so trying to split Cain and Moira up. Kim is behind it. #emmerdale

Last year, Joe was seemingly killed off when he was punched by Cain Dingle for standing his daughter Debbie up on their wedding day.

The fall caused Joe to hit his head on a rock and seemingly Graham ‘disposed’ of his body, as Kim had told him to kill Joe.

But a couple of months ago it was revealed Joe was alive and in hiding from Kim, with the help of Graham.

Did Joe hire Nate as revenge for Cain nearly killing him?

@emmerdale Is Nate working for Kim or Joe or Graham against Cain? #Emmerdale

Recently Faith actress Sally Dexter confirmed she would be leaving the soap, but could she have a bigger link to the farmhand than we thought.

There is a theory that Nate is really Faith’s son, making him Cain’s half-brother.

Fans know Faith left Cain and his sister Charity when they were younger as her husband Shadrach was abusive towards her.

Could she have had a baby with someone else after leaving her children? Or could she have been pregnant when she left, making him Shadrach’s son as well?

So is Nate the long lost son of Faith? half brother of Cain? #Emmerdale

Has Faith got some connection to Nate 🤔🤔#Emmerdale

Nate’s been hired by Faith

An Entertainment Daily theory is that Faith could have hired Nate to split up Moira and Cain.

We know they haven’t had the best marriage and there has been cheating on both parts.

Is it possible Faith didn’t want Cain to be with Moira anymore so she hired Nate to split them up?