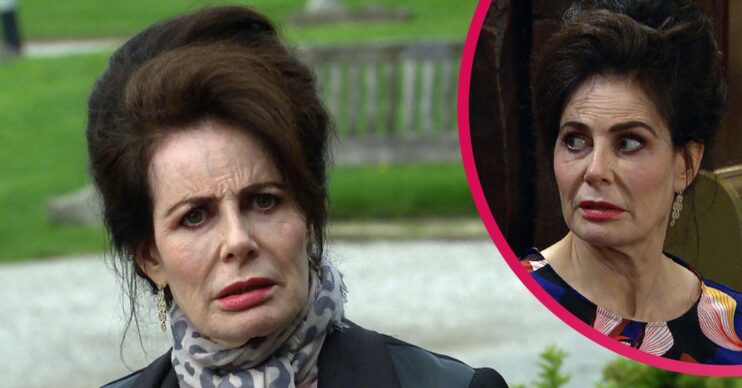 Emmerdale: What is Faith Dingle hiding?

She's hiding something huge from her family

Emmerdale is teeing up a huge shock for the Dingles when it is revealed Faith Dingle is hiding a major secret.

The schemer will soon be seen behaving very shiftily and out of character as her inner turmoil eats away at her.

Just what is wrong with Emmerdale‘s Faith Dingle?

Teasing the upcoming reveal, producer Laura Shaw told Entertainment Daily and other media: “We’ll see something is going on with Faith that she is keeping secret, why?

“There’s actually some lovely scenes exploring motherhood in these episodes, not just with Gabby but with Faith too and her big, huge and shocking secret.”

Laura added that Faith’s daughter-in-law Moira will become embroiled in the secret.

“That’s revealed to Moira and she becomes the one she shared that with,” Laura added.

“There’s some really touching scenes during the week between Moira and Faith.”

It will impact Chas and Cain too: “Cain and Chas is our most loved sibling pairing,” added Laura.

“They have a lot going on as Faith’s secret from the big week will impact on them.”

There will be a special episode dedicated to Faith’s secret, Laura also revealed.

“We’re actually just about to start filming a really special episode that honestly made me cry just reading the script,” Laura added.

“It explores more of a rich history and how their upbringing hugely affects the decisions they make in the present.

“Beyond this we will certainly see that not all those decisions are good ones.”

But what is her secret?

Is her cancer back?

With Faith going off the deep-end soon it seems likely that there’s a big storyline coming.

And if her past behaviour is anything to go by, then Faith is either worried her cancer has returned – or knows it has.

Perhaps it will be fatal – what else could bring her children together in a major Cain and Chas story?

Is one of her kids adopted?

For a man who values the Dingle code and family to a degree that would make Peggy Mitchell uncomfortable, it would be a shock if it turns out Cain isn’t a biological Dingle.

But if Faith is hiding Cain’s adoption then expect fireworks.

Is the adopted sibling Chas, however? How would she cope feeling estranged from the family she’s fiercely protective of?