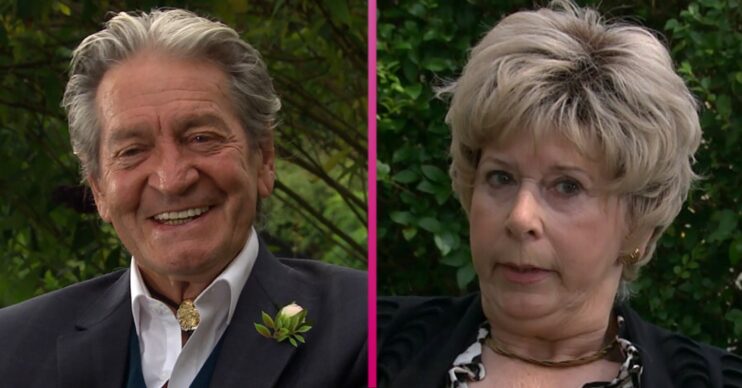 Emmerdale: Were Rodney and Diane married? Why did they break up?

They're making another go of things

Emmerdale is reuniting Diane Sugden and Rodney Blackstock – though he seems more keen than she does!

After a drunken night of passion, Rodney has managed to convince Diane he should move in with her.

However, it’s not the first time these two have been an item – in fact, they share daughter Bernice.

But why did they break up? And who else have they been with before getting back together?

When were Diane and Rodney married?

Read more: Emmerdale: Who is Esme and where have you seen her before?

They share daughter, Bernice Blackstock, who was born December 29 1968, however Rodney didn’t stick around and abandoned them when Bernice was just five years old.

Rodney and Diane didn’t reunite again until 2000 when Bernice’s then fiancé, Ashley Thomas, invited Rodney to the Dales for their Christmas Day wedding.

Bernice, who also hadn’t seen or heard from her father since he left, was furious. But she eventually forgave him for everything. Diane, on the other hand, was not so forgiving.

However, it was clear there was still a spark between the pair and despite Rodney being in a relationship with Louise Appleton at the time, he ended up in bed with Diane again.

Did Rodney have an affair with Diane’s sister, Val?

During Diane and Rodney’s marriage, he had an affair with her sister, Val Lambert. She gave birth to their son, Paul, in 1974, but only Val knew the truth about who his father really was.

Diane had no idea the pair had slept together until Val arrived in Emmerdale in 2004 and got together with Rodney for real.

Rodney was still in love with Diane and confessed his affair with Val all those years ago.

Val then assumed Diane and Rodney were cheating together, but it turned out Di had colon cancer and was confiding in her ex. Devastated Rodney declared his undying love for Diane wanting to get back together.

But Diane rejected him and went on to marry boyfriend Jack Sugden. Val confessed Paul’s paternity at the wedding, leaving Rodney stunned and Diane horrified.

Who else has Diane Sugden been married to?

Shortly after arriving in Emmerdale Diane struck up a close friendship with Jack Sugden. Despite sharing a kiss, they decided to stay friends, and Di went on to have relationships with Jerry ‘Mack’ Mackinley and Alan Turner.

But she and Jack reunited and married in September 2004. However, Diane ended up falling for Billy Hopwood and began and emotional affair with him.

She and Jack couldn’t sort out their problems and separated, but they grew closer once again when Jack’s son Andy was convicted of manslaughter.

Jack went to Spain for a while, but he and Diane patched things up from afar and she was left devastated by his death in 2009.

Diane then fell for Charlie Haynes, an old friend of Rodney’s who told her he had an inoperable brain tumour and only months to live. She later found out he was a conman and had lied to her.

She then had a romance with Doug Potts, Laurel Thomas’s dad, but things ended between them and he moved to Australia.

Who else has Rodney Blackstock been married to?

Meanwhile, Rodney has had more romances than hot dinners!

After leaving Diane he married Maureen Blackstock and they had a daughter together, Nicola King, in 1978.

Rodney had a brief engagement to Steph Stokes, but it ended when it was revealed she was only with him for the money. He went on to have a relationship with much-younger Kelly Windsor.

He also dated Rishi’s ex-wife Georgia Sharma, but that ended when he became a male escort behind her back!

Rodney’s most recent romance was Misty, another young woman (they had a 40 year age gap), but despite their active sex life, Bernice and Nicola managed to put Misty off their dad by lying he had osteoarthritis and only had a few months of normal life left. She dumped him and left for Thailand.

It was announced in September that Elizabeth Estensen is retiring from Emmerdale after 22 years playing Diane.

Speaking about her decision to leave the show, Elizabeth said: “For the past 22 years I have loved playing Diane Sugden – she’s kind, reliable and fiercely loyal.

“However, I feel the time has come to say goodbye. Emmerdale will always remain special to me.

“I’ve been treated with respect and kindness and I’ve had the very best friends and colleagues, both past and present. I’ll miss everyone dearly.”

Liz has already filmed her final scenes. Next week’s spoilers reveal Diane and Gabby making plans to flee to Portugal.

So it looks likely Rodney is going to be left broken-hearted in the coming weeks. Who will help him recover this time?