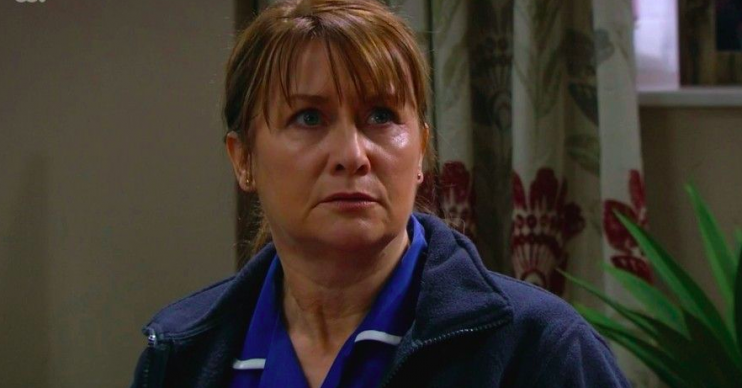 Victoria had been harassed by Wendy for months

Viewers of Emmerdale have screamed in relief as Wendy finally accepted that her son Lee raped Victoria.

Midwife Wendy had refused to accept what her son did and had hounded and harassed Victoria for months but last night she could ignore it no longer.

She read Victoria’s journal which detailed what Lee did, and it finally dawned on her when Victoria caught her own violation.

“I know he raped you,” she shouted, stunning Victoria.

She explained: “I had doubts a while back but I tried to ignore them but eventually I couldn’t.

“Seeing what a nice girl you are and how everyone loves you. And I thought why would a girl like that lie? What would she have had to gain?

“I know it looked like that but I didn’t come here to torment you I just got a job here and moved here to be closer to my grandson. I was horrible to you because I thought you were lying. “

But despite Wendy knowing her son was a vile rapist, she still insisted that she loved and missed him.

She told Victoria: “He was my son Victoria, my first born, my beautiful baby boy and as much as I know you don’t want to hear it I love him and I miss him.

“I miss him every single day.”

It became too much for Victoria and she realised she couldn’t keep on seeing Luke even after Wendy’s acceptance of what Lee did.

She told him: “We can’t be friends anymore because it’s too complicated.

“Us being mates or anything else, it can never happen can it? It always comes back to this one thing – Lee and what he did to me. It’s not fair on anybody. I just need space from both of you so keep away.”

Luke was left to go and comfort his sobbing mother but Vic looked on devastated before walking back into her cottage.

But while Victoria was devastated, viewers were relieved that Wendy had finally acknowledged the obvious truth.

A second said: “Wendy finally accepting what Lee did about time!! #Emmerdale”.

A third said: “Too little too late and Wendy has ZERO right to push her grief for Lee onto the VICTIM. NOne zero. Vic does not owe this woman who was a stranger before her Son raped HER anything.”

Are you relieved Wendy finally knows what Lee did? Leave us a comment on our Facebook page @EntertainmentDailyFix and let us know what you think!