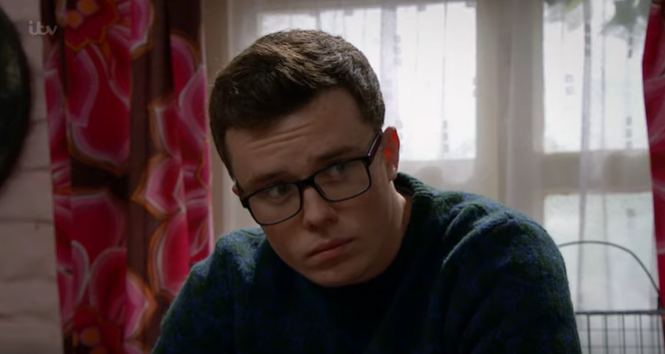 Emmerdale SPOILERS: Vinny’s past to finally be explored

Ever since Vinny arrived in Emmerdale with Mandy Dingle, fans of the soap have wondered about his past.

Some believed the mysterious teenager was Mandy’s secret son, while others suspected they were really lovers…

After Vinny’s arrival last year, actress Lisa Riley – who plays Mandy – teased his real identity would “unfold” in the future.

And now we can reveal that the ITV soap will explore Vinny’s backstory after shock accusations from the Dingles.

In upcoming scenes, Vinny is accused of being a thief when a valuable item goes missing.

Viewers know that Vinny (played by Bradley Johnson) was introduced to the show in January last year as the ‘son’ of Mandy Dingle.

As fans went into overdrive speculating he might, in fact, be Mandy’s child with Paddy, it was later revealed that they’re not biologically related after all.

So what IS the real connection between Vinny and Mandy? So far, we’ve been left in the dark.

But that’s all about to change when Sam Dingle’s ring goes missing and the finger of suspicion points to Vinny.

It’s hardly surprising that he’s blamed, either – having been at the centre of numerous scams since his arrival in the village.

But is he capable of pawning the piece of jewellery for some quick cash, as some suspect?

The young lad has been desperate to be accepted by the Dingle family, so would he risk that by stealing from them?

As the family bicker amongst themselves, it’s not long before the Dingles learn something new about Vinny…

A bombshell is dropped about his past that could help to explain his identity.

Some conspiracy theorists have speculated that newcomer Paul – played by former Coronation Street star Reece Dinsdale – could be linked to Vinny.

Emmerdale bosses recently announced Paul, who arrives any day now, will be a blast from Mandy’s past who will stir things up for her and Vinny.

Emmerdale is still riding high after its fourth consecutive win in the Best Serial Drama category at the National Television Awards, but yesterday they lost out on the TRIC Award for Best Soap to fellow ITV show Coronation Street.

Who do you think Vinny really is? Leave us a comment on our Facebook page @EntertainmentDailyFix and let us know what you think!