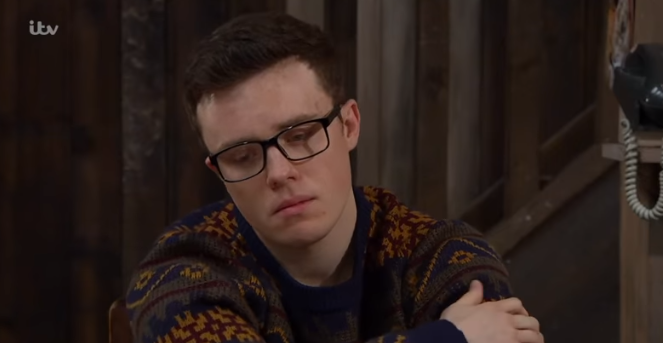 Mandy Dingle shared his past

During Tuesday night’s Emmerdale (March 17), the truth about his real parents came to light as Mandy Dingle opened up to Lydia Hart and Sam Dingle.

I couldn’t hold back the tears, great scene.

Eventually, her ‘son’ came clean, admitting he was covering for Samson to protect him – as he didn’t want Sam to turn against his own son.

When the truth eventually came out, Sam was horrified to discover his son was to blame.

When Sam questioned why on earth Vinny would cover for Samson like that, he revealed his secret.

Mandy explained how she was in a relationship with Vinny’s dad Paul, until he abandoned them, leaving Mandy with the tough decision of handing Vinny into care, or keeping him herself.

Of course, we now know, she kept him after she fell in love with him.

She told Sam and Lydia: “He was nine months old when I first clocked eyes on him.

“Little mite, screaming the street down in this soiled onesie and I looked into his pram and I just knew someone had to look after him.

“I was on a first date with his dad Paul. I moved in with him by the end of the week, you know me I don’t do anything by halves.”

She added: “We were happy and then the wheels started to fall off. Paul got himself into this mess and it just got bigger and bigger.

“One day he walked away and never came back, two days after Vinny started school. I was no-one, just this random woman that his dad had shacked up with.

“I had to make a choice. Do I become the mum he never had or do I put him into care. The easiest call I’ve ever had to make.”

But despite Mandy not being Vinny’s real mum or even his legal guardian, the family agreed that he was a true Dingle and accepted him as one of their own.

Great scenes love Mandy @Reallisariley she's funny, sometimes annoying and mad but has a heart of gold really! Lovely scenes with her and Vinny, she's is his mum ❤

Made me tear up @Reallisariley and Vinnie (sorry I don't know his real name) but you were both awesome.

I couldn't hold back the tears❤😥 great scene @Reallisariley

Those at home were in bits at the emotional scenes, with one tweeting: “Brilliant acting, great story. Made me cry #goodjob.”

Another said: “Great scenes, love Mandy @Reallisariley. She’s funny, sometimes annoying and mad but has a heart of gold really! Lovely scenes with her and Vinny, she IS his mum.”

A third added: “Made me tear up @Reallisariley and Vinny but you were both awesome.”

“I couldn’t hold back the tears, great scene,” said another, while one more added: “Made me cry, emotional episode, amazing acting.”

There were, however, a handful who believed Mandy was hiding something, or even lying, about Vinny Dingle’s past.

Have you warmed to Mandy and Vinny? Leave us a comment on our Facebook page @EntertainmentDailyFix and let us know what you think!