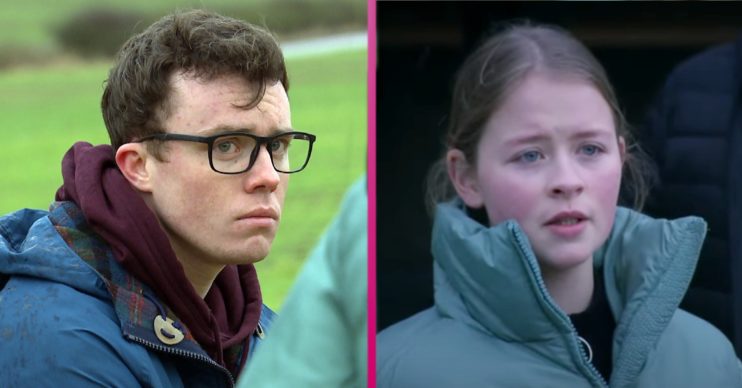 Liv and Vinny have been together for the past few months

Emmerdale fans were left furious with Vinny Dingle as he branded Liv Flaherty ‘a weirdo who doesn’t want sex.’

In last night’s episode of the ITV soap (Tuesday, March 23) Vinny returned from hospital and Liv went to pay him a visit.

When she started asking him questions about his attack, Vinny stuck to Paul’s story. But when she mentioned Connor he began to panic.

When Paul returned home, he told Vinny not to tell Liv what really happened and that he needed to break up with her to stop her trying to find out the truth.

Later, Vinny went and told Liv he was moving back home. But she immediately knew it had something to do with Paul.

Vinny then told Liv she was driving a wedge between him and his dad and ended their relationship.

Read more: Emmerdale SPOILERS: Paul kills Liv as she confronts him over his lies?

When Liv, who is asexual, told Vinny she loved him, he cruelly responded saying: “You’re some weirdo who don’t want sex, what were I thinking? Look Liv – me and you, we’re over.”

Poor Liv was left in tears as Vinny walked off and viewers were furious with Vinny.

Vinny!!! How dare you go that low towards Liv! #Emmerdale pic.twitter.com/z0Wl0VqWxM

I wouldn't forgive Vinny after that if I was Liv. That was really cruel. @emmerdale #Emmerdale

Vinny using Liv's asexuality against her to break her heart???? For why??? absolute wasteman behaviour #emmerdale

If Vinny doesn't tell Liv, then I'm done with this.
The only f-ing weirdo us you Vinny! 😡#Emmerdale

Although Liv was heartbroken, her hurt soon turned to determination to find Connor and get the truth.

Emmerdale: What’s next for Liv and Vinny?

In next week’s scenes, Aaron tracks down Connor and kidnaps him. But when Paul is left alone with him, Connor escapes.

Later Liv runs into Connor on the outskirts of the village and this leads her to figure out the truth about Paul.

Worried about Vinny, Liv confides in Aaron and they need to make it their mission to get Vinny to tell Mandy the truth about his dad.

Read more: Emmerdale confirms at least one character will die during the soap’s first socially-distanced stunt

The next day, Mandy’s nerves are getting to her as she prepares for her wedding day. But she’s unaware Vinny is taking another brutal beating from his dad.

Later Aaron tries to get Vinny to open up as Liv confronts Paul. But has she put herself in danger?