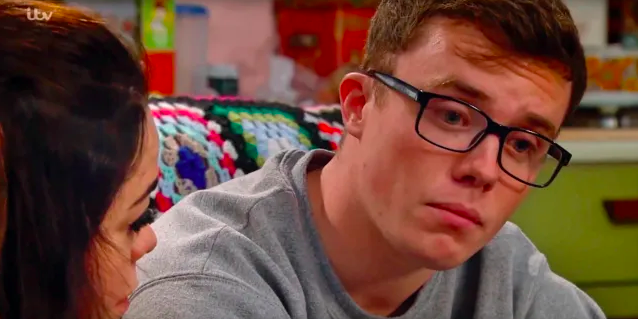 Is Mandy Dingle about to get a blast from the past?

Emmerdale fans think that Vinny’s birth dad will soon arrive in the village – and they’re sure they already know who he is.

On Tuesday (March 17), the Emmerdale revealed Vinny‘s heartbreaking backstory as Mandy Dingle opened up to Lydia Hart and Sam Dingle.

Cue Vinny’s dad coming back on the scene anytime soon.

Eventually, her ‘son’ came clean, admitting he was covering for Samson to protect him – as he didn’t want Sam to turn against his own son.

When the truth eventually came out, Sam was horrified to discover his son was to blame.

When Sam questioned why on earth Vinny would cover for Samson like that, he revealed his secret.

Mandy explained how she was in a relationship with Vinny’s dad Paul, until he abandoned them, leaving Mandy with the tough decision of handing Vinny into care, or keeping him herself.

Of course, we now know, she kept him after she fell in love with him.

She told Sam and Lydia: “He was nine months old when I first clocked eyes on him.

“Little mite, screaming the street down in this soiled onesie and I looked into his pram and I just knew someone had to look after him.

“I was on a first date with his dad Paul. I moved in with him by the end of the week, you know me I don’t do anything by halves.”

She added: “We were happy and then the wheels started to fall off. Paul got himself into this mess and it just got bigger and bigger.

“One day he walked away and never came back, two days after Vinny started school. I was no-one, just this random woman that his dad had shacked up with.

“I had to make a choice. Do I become the mum he never had or do I put him into care. The easiest call I’ve ever had to make.”

But despite Mandy not being Vinny’s real mum or even his legal guardian, the family agreed that he was a true Dingle and accepted him as one of their own.

I think we’re gonna meet him some time in the future. We’ve still a new character played by Reece Dinsdale (think that’s his name) arriving any time soon.

That really wasn’t what I had imagined about Vinny’s past. I was kind of expecting something crazier. Though the fact that we don’t know who the father is leaves the doors open for that. #emmerdale

Those at home were quick to start speculating about Vinny’s last name – which hadn’t been revealed – and the possible arrival of his birth dad.

One tweeted: “I think we’re gonna meet [the dad] some time in the future. We’ve [got] a new character played by Reece Dinsdale arriving any time soon.”

Another said: “Cue Vinny’s dad coming back on the scene anytime soon!”

A third added: “Ah, so Vinny’s dad is… @reece_dinsdale #Emmerdale.”

“That really wasn’t what I had imagined about Vinny’s past,” said another. “I was kind of expecting something crazier. Though the fact that we don’t know who the father is leaves the doors open for that. #Emmerdale.”

Hawk-eared viewers will have noticed that Vinny’s dad is also called Paul.

We’re told that Paul, a blast from Mandy’s past, will stir things up for Mandy and Vinny.

Corrie viewers will know that Reece played Joe McIntyre from 2008 until 2010, when his character died in horrible circumstances.

Reece said about joining Emmerdale: “I’m absolutely delighted to be joining the cast of Emmerdale.

“Having recently directed a couple of episodes, and seen at close quarters the superb work the cast, crews and creatives produce, I can’t wait to become part of the team once again… albeit in a different capacity.

Are you looking forward to seeing Reece arrive as Paul? Leave us a comment on our Facebook page @EntertainmentDailyFix and let us know what you think!