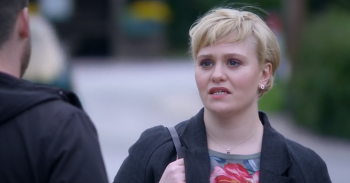 Natalie first appeared in the soap last week, and things got off to a shaky start after Faith’s imagination ran a bit wild and she and Bear told a few lies about the couple.

To the couple’s delight Natalie managed to see the funny side and went to see them again.

However, in Tuesday night’s episode (April 23) when she learned about Aaron’s time in prison, Robert’s one-night stand with Rebecca, and Liv going to prison for spiking a drink, Natalie decided not to go ahead with the surrogacy.

Although Aaron and Robert were thrilled when she agreed to be their surrogate, some viewers think that something isn’t quite right and Natalie can’t be trusted.

Ok i dont wanna rain on anyone’s happy parade, but unfortunately I believe something is not quite right with Natalie, i think #Robron are going to get hurt 😭
My hands will be first up if im wrong 🙌🏻 but there’s definitely more to her #emmerdale @emmerdale

Definitely something going on with Natalie. She agreed way too soon. Maybe it was just a soapy reaction for effect and drama but I think she has her own agenda for surrogacy. Hope #robron are doing their own background check. Where's Mr Shifty when you need him. #Emmerdale

I reckon that surrogate is already pregnant, she's hiding something #Emmerdale

I'm happy that Natalie has agreed to be the surrogate, I hope nothing goes wrong like she changes her mind again, has a miscarriage or when she gives birth, she doesn't decide to keep the baby. #Emmerdale #Robron

take the money and refusing to hand over the baby. She keeps getting calls from her dad. Who is her dad is the question, perhaps someone who Aaron had a problem with in prison??? She asked too many weird questions!

After Rebecca suffered a head injury from the car accident that killed her sister Chrissie and dad Lawrence she struggled to look after her son, so she handed him over to Robert and Aaron.

She was then kidnapped and held hostage for weeks by her serial killer nephew Lachlan, who was also responsible for causing the car crash.

After Rebecca managed to get free and returned to the village, she decided to leave for a new life in Liverpool with boyfriend Ross.

She took Seb with her – leaving Robert and Aaron devastated. However, the pair do visit Robert’s son and see him often.

A child of their own would make their family complete – but will they get their happy ever after? Or is Natalie up to something?

Do you think Robert and Aaron can trust Natalie? Leave us a comment on our Facebook page

@EntertainmentDailyFix and let us know what you think!