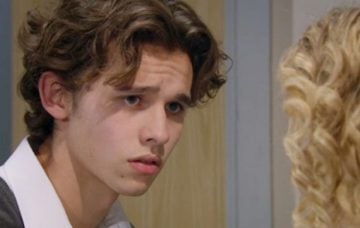 Emmerdale viewers spark debate – Is Jacob a victim of grooming?

He has been groomed by Maya

As Jacob recently turned 16 the physical connection between them has grown and they had sex just after his birthday.

The storyline has caused debate amongst viewers as to whether Jacob actually is a victim of grooming due to his age.

In a post asking ‘If you were David (once he finds out) could you continue as Jake’s adopted dad?’ One Digital Spy forum user posted in January: “In recent episodes it feels like Jacob is as much wanting this and leading it. And he’s supposed to be what? 16? 18?”

Another user replied saying “Of course he wanted it and has been pushing for sex but he has genuine feelings for Maya so that’s only natural but he doesn’t realise he’s being groomed by Maya who knows exactly what she’s doing and knows its wrong on so many levels. He is the victim here.” [sic]

Another forum user wrote earlier this month: “I wish people would stop making excuses for Jacob.

“Jacob is ruthless. Just a few weeks ago he took Gabby upstairs, got what he wanted from her, and the next morning blanked her completely, without the slightest consideration to her feelings or emotional well being.

“Now he’s ordering Maya to split up with David. Let’s not forget that Jacob made the running as regards turning it into a physical relationship. Even had Maya wanted to, there was never any need to get any grooming started as Jacob moved in to snog her face off until she snogged him.”

The post ended with “Jacob and Maya deserve each other, and hopefully they will leave the village together soon.”

One user replied to the post writing “Wow. Just… wow. Hoping a kid gets to spend the rest of his life with his abuser. I’ve seen some horrible takes in my time, a good chunk of them on this thread but that… that is just horrifying, on an entirely new level.

“The villifying going on here in this thread of a confused, manipulated young boy being groomed and taken advantage of by an evil older woman with power over him, who is abusing that and his trust, and whose job is supposed to be to teach him and look out for him is heartbreaking and genuinely scary.

“I think I’m done with this discussion. Some of you are just so determined to see an abused adolescent boy shamed, demonized, and punished for being abused, and that’s just not the kind of thing I want to read any more of.” [sic]

Another replied with “Well said. The victim blaming about this child grooming/abuse is appalling.”

Maya began grooming Jacob last year. Jacob gave her an ultimatum saying she needed to end things with David or it was over between them.

However after the schoolteacher had an accident the pair continued to see each other with Jacob even telling her he loved her.

Although the law states the age of consent in the UK is 16, according to the NSPCC website it is illegal for a person in a position of trust (teachers, careworkers) to engage in sexual activity with anyone under the age of 18 who is in the care of their organisation.

If you have been affected by this storyline please visit the Barnardo’s website.

Emmerdale airs Monday to Thursday next week. Episodes air at 7pm with an extra episode on Thursday at 8pm.