Emmerdale viewers slam Tracy as she lays into Charity

Charity has been struggling to take in that Vanessa has cancer

Viewers of Emmerdale have slammed Tracy Metcalfe as she laid into her sister’s girlfriend Charity for not supporting Vanessa in last night’s episode.

Recently it was revealed to viewers that Vanessa has stage three bowel cancer, which has spread to her lymph nodes.

Vanessa told her girlfriend Charity about her diagnosis and made her swear not to tell anyone.

In Monday night’s episode (March 9 2020), Tracy was annoyed that Charity hadn’t made a fuss over Vanessa for her birthday. However Tracy had no idea that her sister is sick and didn’t want a fuss.

Tracy gathered family and friends to Tug Ghyll cottage for a surprise get together, but when Charity arrived, she told Tracy to cancel the party.

Soon Vanessa arrived and realised her partner had told Tracy about her diagnosis.

Vanessa and Tracy went off for a private chat and the vet confessed that Charity was in denial at first. Vanessa also said she didn’t tell her other half about a hospital appointment, so she went alone.

She then said that Charity had now gone into overdrive and Vanessa feels like Charity is smothering her.

That was harsh Tracy.

They soon returned to the party and Tracy had a word with Charity.

She said: “Well at least now she’ll get the support she needs. Where were you the other day when she had to go to hospital?”

When Charity told her that Vanessa didn’t tell her where she was going, Tracy replied saying: “You were too busy being useless.

“Burying your head in the sand. Now you’re all over her, making her feel suffocated. If you really want to help Vanessa, back off. Leave it to me.”

Viewers were not happy with how Tracy treated Charity and made their feelings known on Twitter.

Nah Tracy, you were clean bang out of order there like. #Emmerdale

That was harsh Tracy #Emmerdale 💔 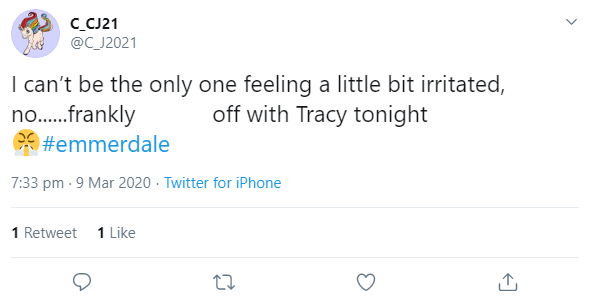 Not gonna lie. If Tracy said that to me, I'd shut down and distance myself from everyone; not just Vanessa. That was…harsh. #Emmerdale

Tracy was out of order, poor Charity 😔 #Emmerdale

Tracy that was mean to Charity! 😡👎#Emmerdale

Wow Tracy!!! Nastiness there, like its not breaking Charity in half, I didn't think she was such a cow!! #Emmerdale

Tracy there’s no need to be nasty #Emmerdale

Do you think Tracy was too harsh on Charity?