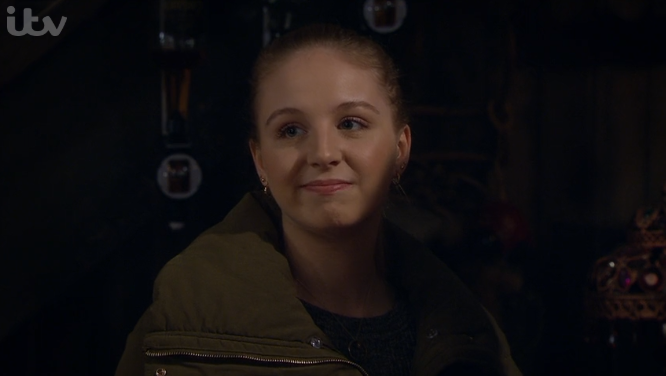 Fans of Emmerdale are predicting some happiness at last for two unlucky characters – Belle Dingle and Ellis Chapman.

Belle is currently grieving for her mother, Lisa Dingle, who died last month after being diagnosed with a terminal heart condition.

Lisa didn’t break the news to her only daughter at first and Belle ended up only having a couple of weeks with her mum before she passed away.

The Dingles have now discovered Lisa’s bucket list and are trying to complete everything on there in her honour – including a 5K run in full fancy dress!

And it was this that brought Belle into Ellis’s orbit earlier this week when she saw him out running.

“How far do you reckon you could run dressed as Shrek? It’s a personal challenge for mum, run a 5k in full fancy dress. Do you reckon it will be dead hard?” Belle asked him.

“Not if you train a bit, find a running buddy,” he replied. After she suggested he help her out, he said: “I’ll think about it.”

Playing hard to get?

In Wednesday night’s episode (June 12) Bear was keen to set up a pub football team and both Belle and Ellis were involved in the discussions.

Fans have picked up on the two of them sharing scenes together and think it won’t be long before they get together.

Ellis and Belle then?? #Emmerdale

Anyone else think that #Emmerdale maybe hooking up Belle and Ellis

ellis and belle , yeah i can see that working #emmerdale

Ellis is currently struggling following being stabbed on the Big Night Out.

He was the victim of the attack thanks to his brother, Billy, and is now living in fear that someone’s out to get him.

He’s been having panic attacks and is afraid to leave the house.

Billy takes matters into his own hands tonight (Thursday June 13) and goes to find Max to talk face-to-face… but when he gets to Billy’s house he is horrified to find out that Max has already left to go and see him in Emmerdale.

Terrified for Ellis’s safety, Billy races back to the village… but back at home Ellis is still in the grips of a panic attack and he is terrified when he hears the handle start to rattle on the back door.

Panicked, Ellis grabs a rolling pin and goes to confront whoever is at the door.

But is it Max? Or is it someone else entirely and Ellis’s fears are about to see him lash out at an unsuspecting visitor?

Do you think Belle should get with Ellis? Leave us a comment on our Facebook page @EntertainmentDailyFix and let us know what you think!