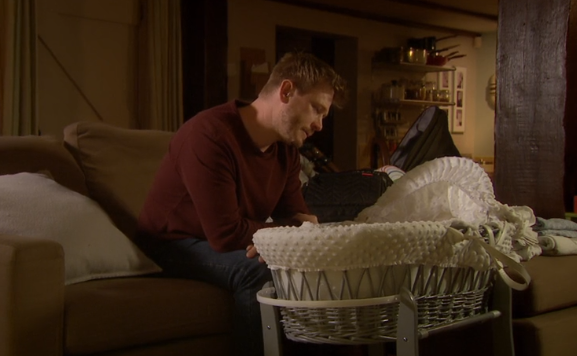 He called his baby Theo!

Viewers of Emmerdale have been left overjoyed that David Metcalfe has decided to keep his newborn son.

On Christmas Day, David and his son Jacob were shocked to see Maya had left a baby on their doorstep.

Maya is David’s ex-girlfriend, however whilst they were together the teacher groomed his teenage son Jacob.

In last night’s episode (December 31 2019), David went to see his dad Eric and admitted he was struggling with the idea of raising a baby all alone with the circumstances and events of the last year.

He told Eric he was considering putting the child up for adoption.

But later he was given food for thought when he ran into Victoria, who is pregnant with her rapist Lee’s baby.

Victoria told David that although something awful happened to her, her baby is the one good thing to come out of a terrible situation.

Later David sat down with the baby and welcomed his son to the family, choosing to call him Theo, a name Jacob’s mum Leyla suggested.

Viewers were overjoyed  that David decided to keep his son.

it's good to hear David tell Theo that he's innocent & he's going to try & be a dad to him 👏
looks like talking to Victoria helped David.#Emmerdale

Fans of the soap know David has been struggling since he discovered Maya had been sexually abusing Jacob.

She began grooming Jacob, who was also her pupil, when he was 15 and began sleeping with him days after his 16th birthday.

After she was caught out, she was sentenced to 12 months in prison but served just five.

Upon her release, viewers discovered she was pregnant.

After she left her child on David’s doorstep, David had a DNA test to find out who the baby’s biological father is.

Aww David is going to keep his son, baby Theo.

Prior to the results being revealed, David had asked Doctor Liam Cavanagh to make sure they said David was the dad, as he didn’t want Jacob’s life ruined.

Although Liam was furious and insisted David was asking him to risk his job, when the results revealed David was the daddy, fans were unsure if Liam had in fact tampered with them.

With viewers left questioning if David really is the dad, some have a theory that Liam, who is Maya’s ex-husband, is the father.