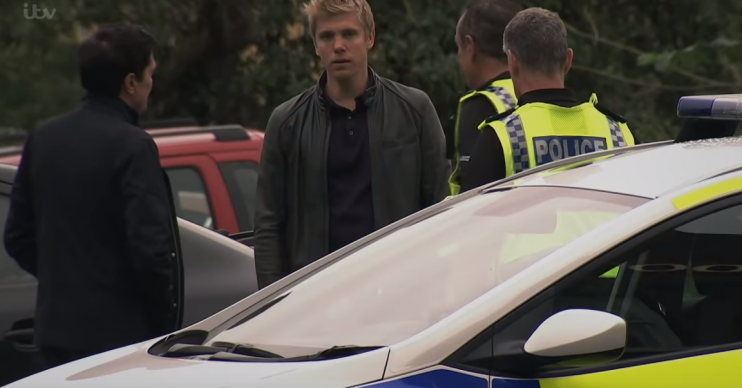 Emmerdale viewers heartbroken as Robert Sugden hands himself into the police

Viewers of Emmerdale have been left heartbroken as Robert Sugden handed himself into the police in last night’s episode (October 17 2019).

A couple of months ago, Robert attacked his sister Victoria’s rapist Lee Posner by hitting him over the head.

He was facing grievous bodily harm charges but recently Lee passed away, more than likely from Robert’s attack.

Realising he could now be facing a murder charge, Robert and husband Aaron decided to go on the run to get away from the police.

Aaron’s sister Liv didn’t want to be apart from her brother and when Mandy went to give them their new passports, Liv snuck into the van and decided to go on the run with them.

However, Aaron said he couldn’t ruin her life and bring her with them and went to drop her off with his mum Chas and Paddy.

But as they went to go get her, Paddy realised the police were following them.

When the police checked the satnav, they went to the B&B, but Robert and Aaron had already made it out of the area – without their money.

Aaron was later persuaded by Robert to meet Chas to get some cash and Robert said he was going to see a man about a car.

However it wasn’t long before Aaron realised the police were heading towards Robert.

He ran after him and was gutted to see his husband had handed himself into the police and was being taken away.

Viewers were left heartbroken seeing Robert being driven off while Aaron sobbed in Paddy’s arms.

While this storyline is leading up to Robert actor Ryan Hawley’s exit, this isn’t the last we’ll see of Robert as the story is expected to continue.

How will Robron end? And will fans be happy with the outcome?