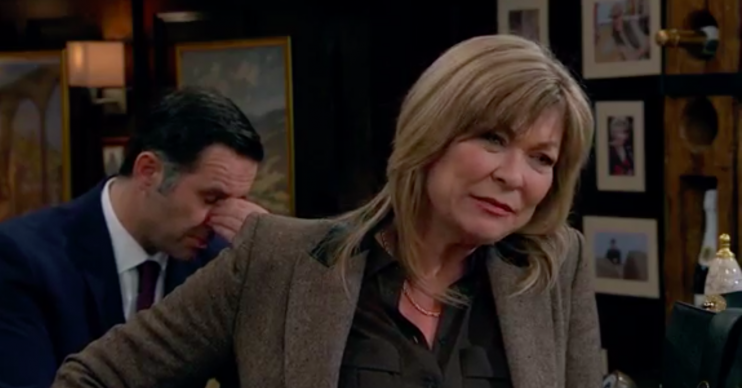 Nate and Moira will have an affair

Emmerdale viewers have a theory that Kim Tate hired Nate to come between Cain and Moira Dingle.

Since his arrival, he’s had a one-night stand with Kerry Wyatt and Tracy Metcalfe and recently started seeing Kerry’s daughter Amy but it he also has eyes for married Moira.

Emmerdale recently confirmed that Moira and Nate would have an affair, leaving a lot of viewers unhappy.

But some viewers think that there is more to their affair and Kim paid Nate to come between the couple after Cain rejected her.

I think there will be a twist to the Moira and Nate affair in #Emmerdale maybe Kim is paying Nate and it's part of her plan to get the farm so I think #Coira will be fine after it.

I agree there’s a hidden agenda

He admitted to her he had gone up there to sort out a garage Lisa had left to Cain’s sister Belle and daughter Debbie, but he planned on selling the garage without them knowing so Debbie didn’t move away.

Nate overheard the conversation and asked Moira why she allowed Cain to talk to her badly.

The pair came very close to kissing and Moira told Nate to pack up and leave, but told Cain he had quit.

Read More: Emmerdale fans begin speculating who will die in the summer storylines

When Cain went to go get him back, the pair started arguing as Nate revealed to everyone, including Debbie, what Cain had been up to in Scotland, leaving her furious.