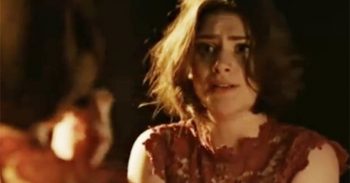 Victoria has been keeping her family and friends at arms length

Last night, viewers saw two out of three Emmerdale flashback episodes revealing what really happened on the Big Night Out.

It was revealed that Ellis was stabbed by the brothers of Riley, Billy’s victim, and that Leyla believed she had killed Maya after hitting her over the head with a rock.

At the end of the second episode we saw Victoria getting ready for bed in her home.

Through her bedroom window, we saw the young chef turn around and say, “What are you doing here?” leading viewers to believe that she was attacked by someone she knows from the village, but who?

After the events of the night out, it is apparent that something is upsetting Victoria. She hasn’t turned up for work, telling everyone she has the flu. However, her ex-mother-in-law Moira doesn’t buy it and has gone to visit her.

It has been suspected that Victoria was drugged and raped after leaving the club, however it has not been confirmed. Viewers have been guessing who they think could be behind Victoria’s attack.

Billy seems to be quite high on people’s suspect lists.

Billy was first introduced at the end of 2018 after he was released from prison for an attack on a man named Riley.

Although he has been involved in crime, would he really attack his brother’s ex girlfriend?

In a Digital Spy forum, one person wrote: “I think it’s Billy (if that’s the brother) no one else had a chance, unless it was Doug.”

Viewers on Twitter also posted their thoughts on Billy.

I think it has to be somebody Vicky knows so maybe Billy? Or one of those lads followed her home:/

Please #Emmerdale don't let Billy be Victoria's rapist. That would be off the scale 100%

Some viewers think Matty could be behind the attack.

Victoria has been friends with Matty since they were teenagers, when he was known as Hannah.

Matty went to visit Victoria after she didn’t come with him to his follow-up appointment after his surgery. However, things turned sour between the friends and she told him to get out, clearly distressed.

One Digital Spy user wrote: “I either feel like it was Matty but at the same time I don’t think it is because she didn’t seem uncomfortable with him when he came round. Or it was someone who was at the club before.”

Who thinks it was matty who raped Victoria? @itvemmerdale #bignightout #emmerdale

As if it couldn't be bad enough…….
Victoria was at home?
She knows her attacker?
WE know her attacker!!!
Please don't let it be Matty 😲#Emmerdale pic.twitter.com/wknRWeJ6zL

Leon first appeared in Emmerdale last year when he was introduced as a potential love interest for Victoria as she tried to get over her estranged husband Adam.

After a drink, Victoria went back to her home with Leon, but after he suggested they went upstairs, it was Victoria obviously didn’t want to.

As he told her to stop teasing him and grabbed her arm, Vic’s brother Robert walked in telling Leon to get out.

He then appeared in February and began harassing Dawn and trying to sleep with her.

However, she kneed him where it hurts. Although he hasn’t been on screen for a while, a couple of viewers are wondering if he could be behind the attack.

In the Digital Spy forum a user wrote: “Could it be that Leon again? I had a feeling he may have got pretty nasty with Victoria last time if Robert didn’t intervene.”

One user on the Digital Spy forum even suggested Dawn’s father Will. The user wrote: “Could be the vicar’s stalker?”

Dawn has been sneaking around the village for the past few weeks. However, he has been focused solely on torturing vicar Harriet for sending him to prison.

Lee from the club

Read More: Emmerdale fans slam Maya story for “anti-climax” as she gets away

Amy and Victoria were talking to two men in the club and some viewers believe it could be someone she met on the night out, specifically a man named Lee.

It was recently revealed Kris Mochrie, who plays Lee, has previously been jailed for supplying a date rape drug.

Although, it has not been confirmed Lee will be the one to attack Victoria, viewers believe he is dodgy.

A Digital Spy user posted: “It’s obviously, I thought, someone she knew from the club earlier, they won’t make a long standing character into a monster especially Matty as someone suggested, I somehow think we are going to go through tortures when Matty decides to date they have that one set up to run and run.” [sic]

My emmerdale theory
Billy stabbed Ellis, thinking he was max
Rhona got off with the guy that was hanging around her in the club
The guy that disappeared that amy and Victoria made friends with raped her
Maya has escaped from the village #emmerdale @emmerdale

What do you think happened? Leave us a comment on our Facebook page @EntertainmentDailyFix and let us know what you think!