Viewers of Emmerdale have been left divided as Cain Dingle threw his wife Moira out of her own home.

Over the summer Moira had an affair with the farm's newest employee Nate Robinson.

A couple of weeks ago, Cain found out about the affair and during the explosive showdown, Nate revealed he was Cain's son.

Moira and Nate were having an affair (Credit: ITV)

Since the affair was revealed, Cain decided to go on a camping trip with former flame Amy, their son Kyle and Cain's son with Moira, Isaac.

I'm not sticking up for Moira, but it is her farm, isn't it?

Before he left he made clear to Moira's nephew Pete that he wanted them both to move out of the farm, but Pete refused as he had a share in the farm.

When Cain returned from his trip in Friday's episode (November 1 2019) he told Moira he was moving back in but he wanted her to move out. 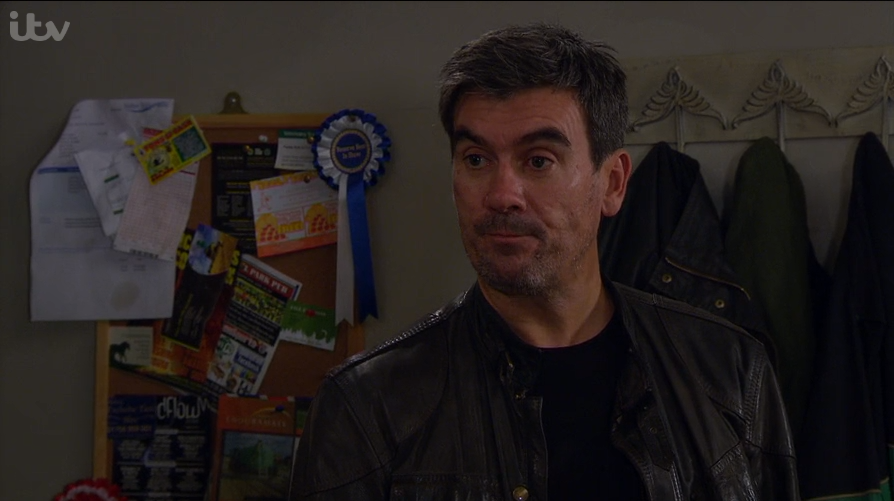 Later at the farm, he was confused as to why she was still there, but she said she wasn't going anywhere.

She suggested to her husband they could have separate rooms and still live together as a family.

However Cain didn't want to live with her anymore and he told Moira if she thought anything of her children she would leave without a fuss, which she eventually did.

Viewers were left divided over Moira leaving the farm as she technically owns it.

Some were questioning how Cain could throw Moira out of her own property and even called him a bully for doing so.

Isn’t that Moira’s farm? How can Cain put her out? #Emmerdale

I know Moira is the one who cheated, but I didn't expect her to let Cain bully her into leaving the farm.
She's usually so feisty, she should have grabbed her shotgun, like she did with Nate, and told Cain to bugger off.#Emmerdale pic.twitter.com/H2MTcNafmY

Cain being a bully 😬😬#Emmerdale

Moira being kicked out of her own home by Cain? Hmm #Emmerdale

What the hell Cain, it's literally her house #Emmerdale

I'm not sticking up for Moira but it is her farm isn't it!! #Emmerdale

Whilst others were glad Cain chucked her out and have no sympathy for Moira whatsoever.

Moira made her bed now has to sleep in it! #emmerdale I pic.twitter.com/7gOST9EIqX

If Moira hadn't destroyed the caravan she was fornicating in, she could live there #Emmerdale

You asked for it Moira #Emmerdale

Fans of the show know Moira moved into Butlers farm in 2009 with her husband at the time, John Barton, and their three children, Adam, Holly and Hannah, who is now known as Matty.

Moira owns the property and owns a majority of the farm with Ross and Pete Barton having a small percentage of shares.