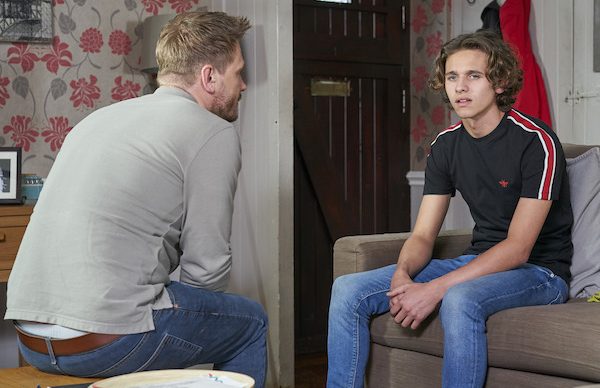 They've accused his dad David of stalking him

With Jacob still refusing to have anything to do with David since the whole Maya fall-out, the sad dad has taken drastic measures to communicate with him.

He’s anonymously befriended his son on an online gaming site, and has been able to chat to him – even though Jacob thinks he’s talking to another lad.

While this development is making David – and Leyla, who’s also joining in –  feel happier, it’s outraged some Emmerdale viewers, who have called what they are doing “grooming”.

They are shocked that Jacob’s parents would do such a deceitful thing after the teenager was groomed by his schoolteacher Maya.

So is David now effectively grooming Jacob, too? #Emmerdale

Just got groomed by a peado , now david wants Jake to friend a stranger on psn #emmerdale

Layla and David are clueless No wonder Jacob is #emmerdale

David is coming across as a stalker in this Jake storyline. Not nice… #emmerdale #notyoursondavid

Leyla and David communicating with Jacob anonymously to be better parents… it’s touching yet disastrous. Which is everything you expect from Leyla and David. #Emmerdale

I take back everything I’ve said about Jake, its david that’s in the wrong #emmerdale

In any case, it looks like David and Leyla’s game has already been rumbled. Jacob has just landed a job at the cafe and, although he mentioned his new employment to his ‘new gaming friend’, he didn’t mention where it was.

When Jacob received a message asking when he would begin his job at the cafe, Jacob realised his new friend had to be someone local to know that detail.