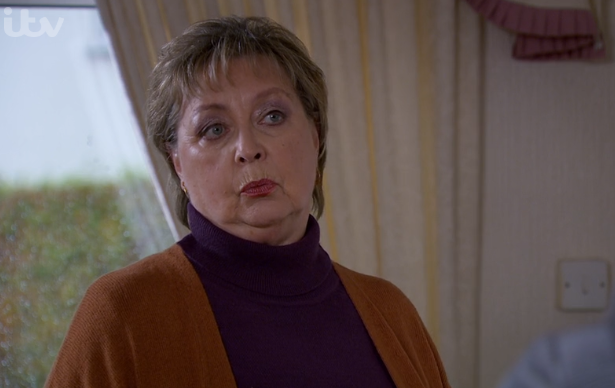 Barbara seemed uninterested in her grandchild

Viewers of Emmerdale are disgusted with Maya Stepney’s mother Barbara.

Fans of the show know schoolteacher Maya was dating David Metcalfe, however she soon began grooming his son Jacob, who also happened to be her pupil.

She began grooming Jacob when he was 15 and started sleeping with him days after his 16th birthday.

Eventually she was caught out and ended up being sentenced to 12 months in prison, but was released after five.

When she was released, viewers learnt Maya was pregnant.

On Christmas Day (December 25 2019) a baby was left on David and Jacob’s doorstep with a note from Maya.

Unsure who the father is, David, along with Jacob’s biological mother Leyla has been trying to track down Maya and in last night’s episode (December 26 2019), Maya’s ex-husband Liam took Leyla to see her mother, Barbara.

Asking about her whereabouts, Barbara admitted she hadn’t seen Maya since she had been sent down and had disowned her.

Leyla asked Barbara if Maya was staying with friends and she replied: “I thought you said you knew her? If you did you’d know she doesn’t have any friends.”

Leyla and Liam explained that Maya left her baby on her doorstep but Barbara seemed completely uninterested, saying she didn’t want to be a grandmother.

Leyla said to her: “No wonder Maya was such a cow with a mum like you.”

But Barbara blamed Maya for all of her problems. She said: “Look love, my daughter’s been nothing but trouble since the day she was born.

Viewers were disgusted by Barbara’s behaviour.

No wonder Maya's got problems-It turns out the apple doesn't fall very far from the tree! #Emmerdale #BoxingDay

woah maya has been a case her whole life @emmerdale no support given so……. ah well done #Emmerdale

Maya’s mum is a piece of work! #emmerdale pic.twitter.com/bpHdrxNzdf

Barbara then went on to explain Maya had left the country.

What does this mean for her child, and who IS the father?