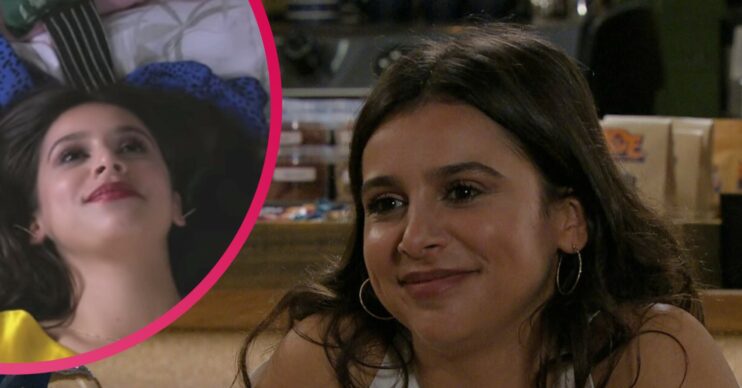 The murderer is determined to win David back

Emmerdale fans were left feeling uncomfortable after numerous scenes last night, most notably when Meena Jutla sung to herself in the mirror.

Determined to win back David Metcalfe from Victoria Sugden, Meena performed Avril Lavigne’s Sk8er Boi while getting dressed to kill.

But it was a bit too much for some viewers who felt it was just uncomfortable.

Why did Meena sing Sk8er Boi in Emmerdale?

Encouraged by new bestie Nicola King, Meena decided she needed to go and get her man by dressing to impress and showing him exactly what he was missing.

It’s a slight departure from her previous plan to murder the other woman, and arguably it was worse than murder! It certainly seemed pretty crazy as she rocked out to Sk8er Boi while picking out a killer yellow dress.

“Victoria Sugden: prepare to lose,” Meena smirked as she fell back on the bed after her performance.

The desperate Meena scenes are boring as sin; give her what’s coming to her & let David & Victoria live happily ever after #sickofthatpsycho #Emmerdale

Who the hell wrote that scene, hilarious, bordering on embarrassing, come on #emmerdale you can do better than that, & end this story quick, Meena is no Pat Phelan 🤣🤣

Are we on a cringe tally in #Emmerdale? I think Meena rocking out to Avril Lavigne is even worse than the whole Noah/Chloe saga

Meena’s fashion/ singing segment that was cringe though 😂😂🤮#Emmerdale

To be fair, we don’t think the soap is pitting Meena as the next Adele, and some viewers actually thought it was the best thing in the show!

They love Meena – and her singing.

Meena performing Sk8r Boi by Avril Lavigne is a soap highlight of 2021 for me, so camp, soo good 😂 #emmerdale

Wooo I Love It When Meena Sings 😍😁🎶#Emmerdale @emmerdale

What other songs has Meena sung before?

It’s not the first time mad Meena has belted out a tune.

When she was on her way to off Leanna Cavanagh she sang the Black Eyed Peas I’ve Got A Feeling as she stalked her through the graveyard.

After killing Leanna, she danced furiously to Britney Spears’ Toxic in her bedroom.

And when she was hunting Andrea in the maize maze she was singing Run Rabbit Run.

What other Emmerdale scenes made viewers cringe?

It’s not the first time this week fans have been left feeling uncomfortable watching the show.

In scenes on Tuesday night (November 16), Noah and Chloe attempted to have sex, but he had drunk too much wine and couldn’t perform.

And last night, he told her she was the ‘best thing that ever happened to him’ and they agreed to run away together.

Fans were quick to comment: “How embarrassing must that have been for poor Noah? Major cringe.”

“Noah and Chloe really are so cringe, sorry I just can’t,” added another.

A third wrote: “Omg Noah this is so cringe.”