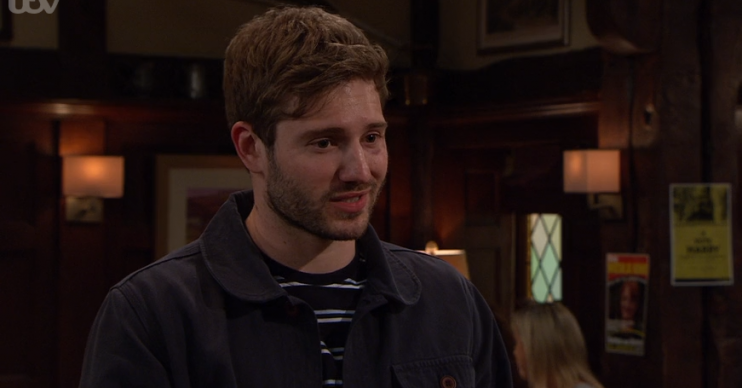 Zoe Tate hasn't been in Emmerdale for 14 years

Viewers were left confused as Jamie Tate referred to his half-sister Zoe as “Auntie Zoe” in last night’s episode of Emmerdale (May 2).

Jamie hasn’t got off to the best start in the village after being involved in accident which ended up knocking over Eric Pollard and the fact that he is the son of villainous Kim Tate doesn’t help.

The student vet has been blamed for the accident, however, Megan was texting at the time she crashed into the back of Jamie and Eric admitted last night that he’s losing his hearing and didn’t hear Jamie’s car.

Rhona has taken Jamie on at the village vets and although Belle and Vanessa seemed to warm to him, it looks like it will take Paddy slightly longer.

As Jamie sat with Belle and Paddy for a drink so they could get to know him, he asked if his and Chas’ unborn baby was their first, unaware they lost baby Grace. It brought back painful memories for Paddy, who told him to get another mug to give him a job.

Later, Jamie and Paddy had a word to try and sort things out and Jamie told Paddy: “Look I’m not expecting you to change how you feel about me overnight but I really need this job.

“I’ve wanted to be a vet like my Auntie Zoe since God knows when. She thinks really highly of you. I guess, I just, look I want to follow in her footsteps, you know, if you’ll let me.”

Paddy responded with: “Fine. Your Auntie Zoe was a very dear friend of mine.”

Viewers were left confused by this as Zoe is Jamie’s older half-sister as they are both children of Frank Tate.

@emmerdale Why did Jamie call Zoe Aunty Zoe? I thought they are brother and sister as Jamie is Frank’s son #Emmerdale

Is it just me or did Jamie day he wanted to be a vet just like his Auntie Zoe? I though Zoe and Chris were his half siblings?! #Emmerdale

@emmerdale is it me or did #jamietate call Zoe his auntie tonight? He was Frank and Kim Tate’s son so as Zoe was Frank’s daughter then surely she’s his half sister? #confused #jamietate #emmerdale

Hold up!!!! Jamie wants to be a vet like he’s Aunty Zoe??? Isn’t his Father Frank? Wouldn’t that make Zoe his sister? #Emmerdale

Why is Jamie Tate calling Zoe his auntie? She’s his sister? Have I missed something 🤷🏼‍♀️ @emmerdale #Emmerdale

Could he be calling his sister Auntie Zoe due to the 28-year-age gap?

She had an explosive departure in 2005 when her and Home Farm estate manager Callum Rennie tampered with a gas pipe and set a timer so the house exploded when the King family, who conned Zoe out of the property, arrived.

The pair drove out of the village and haven’t returned since.

Leah Bracknell, who played Zoe, was diagnosed with stage four lung cancer three years ago, and she has come up with a “mad, crazy idea” to embrace life with the disease.

ED! Have contacted Emmerdale reps for comment on this story!