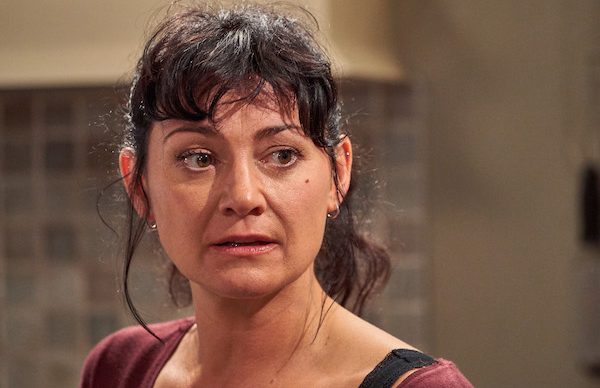 Emmerdale viewers brand Moira ‘irritating’ as she goes back to Nate AGAIN!

She's cheating on her husband, Cain

Viewers of Emmerdale have branded cheating Moira Dingle “irritating” after she went back to lover Nate Robinson once again.

Fans of the show know Moira has been having an affair with farmhand Nate for months behind her husband Cain Dingle’s back.

But recently Moira’s nephew Pete found out about the affair after seeing a message on his aunt’s phone.

The farmhand has made several threats to Pete about keeping his nose out and Moira eventually gave into Pete’s demands and ended the affair.

But of course, this isn’t the end…

In last night’s episode (October 10 2019) Nate told Moira that he was in love with her and even suggested they moved away with the children.

Although Moira seemed adamant that she didn’t want to continue the affair, the pair ended up kissing at the end of the episode.

Viewers are fed up of them and have branded Moira “irritating”.

Oh no not again Moira! Stop it! #emmerdale

Visual representation of Moira going back to Nate every single time! #emmerdale pic.twitter.com/xbWj2d3MeT

Moira is thick as mince. Can’t keep away from robotic Nate. #Emmerdale

Fans of the show know that when Moira and Nate began sneaking around, they agreed that there would be no feelings involved.

Some viewers have a theory that he is secretly Cain’s long-lost son, whilst others think he is Cain’s nephew, son of Nathan Dingle.

Others think that Kim Tate hired Nate to destroy Cain and Moira’s marriage.