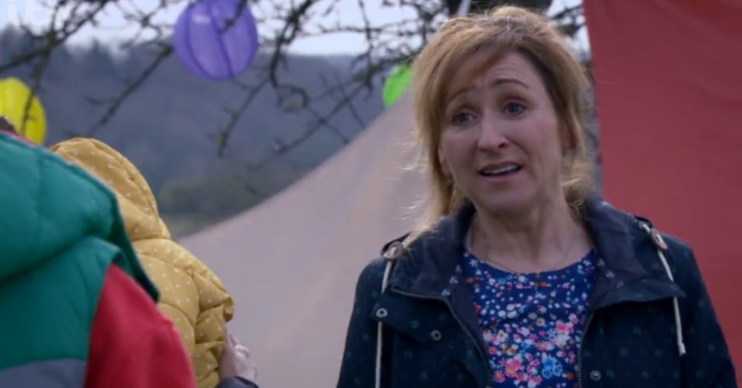 Arthur has been through a lot in his short life

Laurel is at the end of her tether with the way her son is acting, and will call the police on him after the latest incident.

Since last year, Arthur, who was once a sweet boy, suddenly turned and became quite nasty. He began bullying Jai’s son, Archie Breckle, who had recently lost his mum.

After the death of his grandfather Sandy, Arthur admitted to Laurel he had been tormenting Archie. But things didn’t exactly improve.

Another incident occurred where Archie pulled a cabinet on himself and blamed Arthur, knowing it would land him in trouble.

Furious at Archie hitting back, Arthur decided to try and get him in trouble.

In last Friday’s episode (May 8), Laurel and Jai’s family came together for Rishi’s birthday camping trip. But after Archie was told not to light the fire, Arthur tried to goad him into it.

When Archie refused to disobey instructions, Arthur lit the fire in the hopes of blaming Archie. However, he didn’t realise the fire had spread to a nearby tent, where his little sister Dotty was taking a nap.

Luckily Laurel managed to pull Dotty out of the tent and she was unharmed. Nevertheless, Laurel was furious with Arthur.

But viewers actually think Laurel is to blame for her son’s behaviour.

What have Emmerdale fans been saying?

In a Digital Spy forum, one fan wrote: “I honestly have no idea where this whole story with Arthur and Archie will lead. Laurel is going to call the police on him according to spoilers for Wednesday.

“Will Arthur actually end up in prison/some kind of detention centre? Or do you think this will just lead to him doing more demon child stuff?”

A fan replied saying: “With any luck the police will do the only sensible thing they can do, given that Arthur didn’t commit any crime… Arrest Laurel for child neglect.”

A second said: “Laurel probably thinks that we still live in the days when the local bobby could leave the troublesome child in a cell for a few hours to scare the crap out of them. Which probably worked for a lot of kids.

“But clearly in Arthur’s case it’s about more than just mucking around and being wild. Laurel just isn’t interested in taking the time to find out what’s going on or accepting that she might have got stuff wrong. I’m not even sure if she’s capable of that.”

Read More: Emmerdale SPOILERS: Cain and Moira have a moment

Another viewer added: “I really liked the scenes with Gabby. Thank goodness she was actually listening to him. Laurel needs to stop putting men before her children.”

A fourth said: “Has Laurel ever tried listening to Arthur? Arthur has been crying out for attention for what feels like years. Even Gabby has more sense.”

Do you think Laurel is to blame?