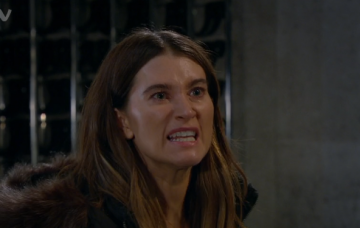 They are not happy with her!

Emmerdale viewers have turned their backs on Debbie Dingle after her behaviour towards Cain.

In Monday night’s episode after Sarah lashed out at her mother for the way she has been treating her dad, Debbie slapped Cain.

He had criticised parenting and in anger she warned Kerry to keep her grandson Kyle away from his dad, Cain, telling her: “You were right. My dad is dangerous isn’t he? So keep Kyle as far away as you can.”

In last night’s episode, after Cain spoke to his daughter, it was obvious she began to regret what she said to Kerry, but Kyle’s grandmother had already contacted social services.

Viewers have not been impressed with Debbie’s behaviour, telling her to grow up.

Debbie needs to put her revenge for Joe behind her and put Sarah first, her behaviour is affecting her so much. Debbie is missing the point grow up girl, Cain is your dad you only get one of those😑 #Emmerdale 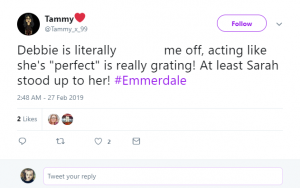 I will be so glad when Debbie leaves Emmerdale pity she isn't taking parent of the year Kerry with her to! If i have to listen to anymore of her nasty whinging i'm gona smash the screen with the remote 🤬🤬 #Emmerdale

The father and daughter have been fighting since Debbie found out that Cain punched her fiance Joe Tate causing him to hit his head on a rock, seemingly killing him.

However, as viewers know,  Graham Foster noticed Joe’s hand twitch after the blow and he put him into the boot of his car.

We later saw Graham leaving the viaduct sobbing, leading fans to think he was the one who really killed Joe.

Although Joe’s body hasn’t been found, it’s believed Graham shot him and buried him.

Next week Kerry will be heading off to Ireland with Marlon, Jessie and Paddy to track down her daughter Amy in the hopes of getting custody of Kyle.

In 2013 Amy tried to run away to Ireland with her son after kidnapping him from his adoptive grandmother Joanie. But Cain showed up as she was about to board the ferry and persuaded her not to take Kyle.

Amy left the soap but her character will be returning. She was originally played by Chelsea Halfpenny but the role will be played by Natalie Ann Jamieson.

Do you think Debbie and Cain will work things out? Leave us a comment on our Facebook page @EntertainmentDailyFix and let us know!