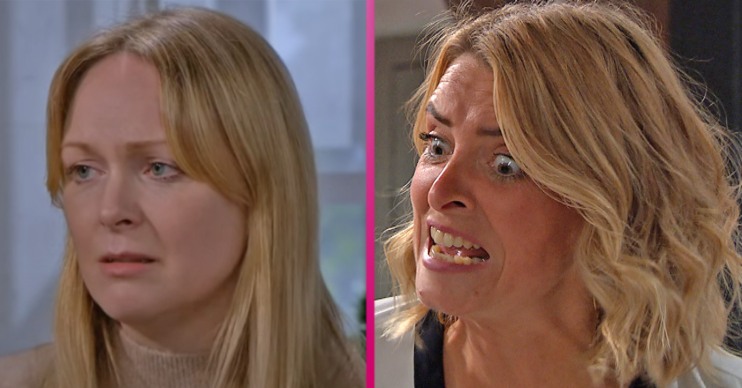 Emmerdale SPOILERS: Soap to drop hint Vanessa is dying of her cancer?

As her partner Charity Dingle is desperately trying to sort out adopting Vanessa’s son Johnny should the worst happen, Vanessa is having treatment at her mum’s house.

However next week when Charity is forced to pay off Johnny’s biological father Kirin to ensure she can adopt him, she lets slip that Vanessa is dying.

In a furious row with Paddy over Kirin – who left Paddy’s ex Tess dead in a car accident before fleeing the village – Charity begged him to not go to the police for Vanessa’s sake.

She said: “I’ve got a dying partner to think about. Look Paddy, I totally get how you feel but this is not your battle.

“It’s not fair Paddy, correct. But life isn’t fair. Take a trip up to Vanessa’s mum’s then and go and take a good look at your mate. See the state she’s in and then go and pile on more worry. And then explain to her what’s fair.”

Emmerdale viewers will know that Kirin is currently on the run from the police after being involved in a hit and run incident back in 2016.

Next week sees Charity and Priya chatting about the fact it might be easier if Kirin remained hidden now that the adoption process was going through.

However, little do they know, Kirin is watching them from afar.

Priya is stunned when Kirin approaches her, but her shock soon turns to disgust when he starts demanding money.

When Priya refuses to pay him off, Kirin turns his attentions to Charity instead.

Kirin tells Charity that he will make it impossible for her to adopt Johnny unless she hands over a huge amount of cash.

Eventually Charity meets with Kirin, but when he counts the cash and finds it’s still short, he starts to show his true colours.

NEXT WEEK: Charity makes a big decision but will it pay off?

👀 See what’s coming up NEXT WEEK on #Emmerdale 👀

As things turn nasty, Tracy turns up and, to Kirin’s horror, the police aren’t far behind her.

Will he manage to escape once again?

Or is he about to pay for the crime he committed more than four years ago?