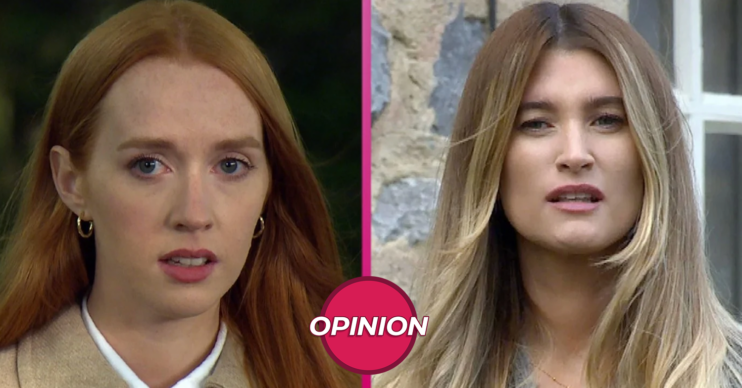 OPINION: Emmerdale: ‘Stop starting storylines and not finishing them’

The soap needs to take a long hard look at itself

Emmerdale has a huge problem – it just cannot finish its storylines.

The ITV soap has been going for almost 50 years so you would be forgiven for thinking that it had a pretty good idea of how to tell a story.

And in many ways it does it well.

But my goodness it has a horrible habit of hyping up these huge storylines – and then just not delivering.

The mechanic happily went off to live in Scotland for a while to cover for actress Charley Webb’s maternity leave.

Debbie made a huge return the following Christmas where she was revealed to be Al Chapman’s mystery lover.

A short storyline followed where Debbie took revenge on Al by teaming up with his girlfriend Priya Sharma.

Emmerdale storylines that miss the payoff

Satisfied with her revenge, Debbie then spent a month back in the village before remembering she needed to hire a manager for her garage in Scotland.

She told her daughter Sarah she would be back soon – and then never came back.

It left viewers completely baffled – and enraged those who enjoyed the character.

And it’s not as if it is an isolated incident.

Last year Luke Posner left the village after discovering he was guilty of killing his brother Lee – and not Robert Sugden, who’s serving life in prison.

The storyline literally went nowhere with Robert apparently preferring life behind bars – and off-screen – to life in the village.

Issues like this aren’t even restricted to classic characters.

Look at Chloe Harris – her entire arrival storyline centred around Kerry working for a huge villain and rescuing his daughter Chloe.

Fans went into overdrive trying to work out who the mystery man was – someone from Emmerdale’s past, surely?

But in the end they never found out.

Read more: Who’s who in the cast of Emmerdale? Meet the full 2022 cast

Chloe’s dad was forgotten as quickly as Debbie’s promise to return, and Robert’s get out of jail free card.

And it’s just not good enough.

Emmerdale bosses need to get to grips with this – or why should anyone bother watching?