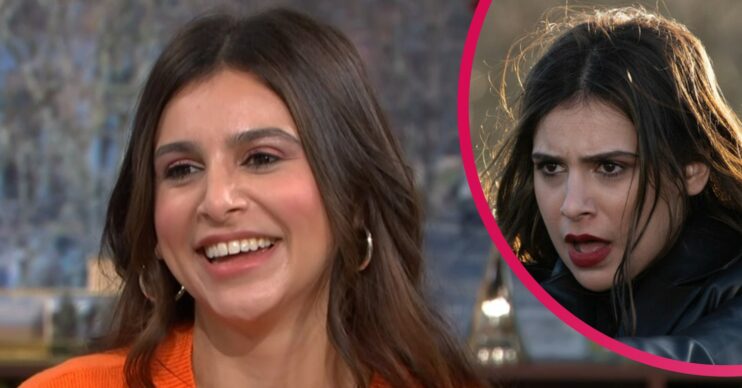 The Meena actress has teased 'more drama to come'

Emmerdale star Paige Sandhu has suggested Meena Jutla’s role in the soap is not coming to an end just yet during an interview on This Morning.

The soap serial killer is terrorising the village this week on screen, but anyone thinking this is the last we’ll see of her might just have got it wrong.

“There are two people’s lives that hang in the balance this week,” Paige revealed.

“And I can say that this is the beginning of the end for Meena, but there’s more drama to come.”

So we know Meena will be leaving soon – but not necessarily just yet.

What’s happening in Emmerdale this week?

Meena has kidnapped bride and groom Billy and Dawn on their wedding day.

She drove them to a viaduct and fired a gun, but Leyla Cavanagh got caught in the crossfire and was the one who got shot.

As Dawn tackled Meena and started beating her, Meena laughed: “I die and you’ll never see your son again.”

A lifeless Harriet, who had been looking after Lucas, was then revealed to be on the floor at Dawn’s house.

What has Meena done to Lucas? And will Dawn get to him – and Harriet – in time?

What else did Paige Sandhu say on This Morning?

Paige also revealed how Meena’s fetish for singing came about.

Meena is known for belting out a tune every time she makes a kill.

“It came from the writers,” she explained.

“The first time I sang was when we were filming the murdering Leanna scenes. It just sort of caught on and now I’m the singing dancing serial killer!”

Of the drama playing out on screen this week, Paige revealed just why Meena is going after Billy and Dawn.

“These scenes have been some of my most favourite scenes. Meena is at her best in these scenes, she’s funny, she’s wild, she’s scary, she’s created this plan which is so over the top, but just works.

“The thing is with Meena, she actually has a line where she says: ‘my problem is that I’m in love with being in love’.

“I don’t think Meena’s capable of feeling love the way you and I can, but there is a truth in that where she falls in love with a guy, she wants to possess him, control him, have all of his attention and then eventually that doesn’t work because it’s not healthy and he moves on and she suffers.

“She feels like: ‘why is this guy cheating on me or leaving me?’

“It’s happened so many times that now it’s the last straw and she wants to make Dawn and Billy suffer the way she’s suffered. ”