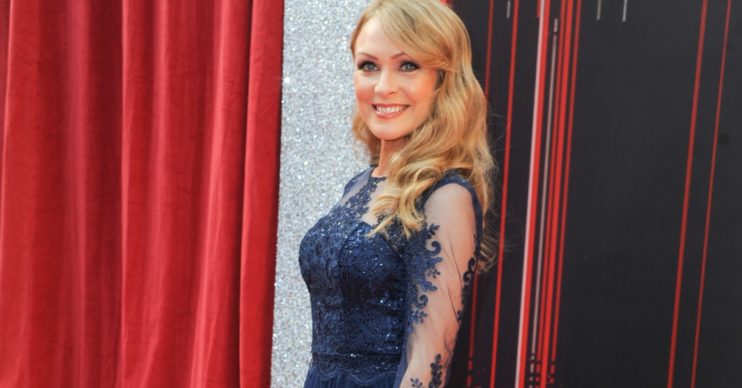 The Vanessa Woodfield actress is expecting her first child

The actress, who plays Vanessa Woodfield in Emmerdale, announced the news she and her wife, Kate Brooks, were having a baby last month.

Emmerdale star Michelle Hardwick jokes ‘what has become of me’?!

The 44-year-old actress is due in October and has shared a gorgeous picture of her growing tum as she adjusts to pregnant life.

She even joked about what she’s turned into as she’s been baking and is wearing a floral dress!

Michelle captioned the pic: “I’ve baked brownies and I’m wearing a floral maternity dress. What has become of me?”

I’ve baked brownies and I’m wearing a floral maternity dress. What has become of me? 😆#adventuresinpregnancy #wethairdontcare

Antony Quinlan, who played Pete Barton on the soap until earlier this year, said: “You look [fire emoji] Sexy mamma.”

Another fan added: “Pregnancy looks so good on you.”

“You look gorgeous and the brownies look yummy! I’m glad to see pregnancy is treating you well,” said someone else.

What has become of me?

Last week Michelle updated her followers on her pregnancy cravings.

Squashies are soft sweets that come in all sorts of flavours and it got people talking about what gender her baby might be.

Although Michelle hasn’t revealed the sex of her baby, an old wives’ tale suggests that a sweet tooth during pregnancy is a sign it’s a girl!

When did Michelle announce her pregnancy?

The 44-year-old actress revealed her pregnancy last month in a cute photo on Instagram.

The image was of Kate and Michelle and their dog, Fred, and was captioned: “Fred’s big brother duties commence in October #BabyBrooks.”

Vet Vanessa Woodfield arrived in Emmerdale in 2008 and has been part of some huge storylines.

Currently her character is battling bowel cancer and is after an operation is having chemotherapy.

Wanting to make sure her son, Johnny, is looked after should the worst happen, Vanessa is putting the final plans in place for her fiancée, Charity Dingle, to adopt Johnny, but things have already hit a snag.

Although Vanessa doesn’t know it, Charity has discovered that the tot’s dad, Kirin, needs to agree.

Kirin is currently on the run in South America after causing a fatal hit and run, and no one knows how to get hold of him. His former stepmum Priya has said he keeps moving around to avoid being caught.

With Rhona and Charity determined to keep the stressful news from Vanessa, can they sort it out before she discovers things aren’t as straightforward as they’d hoped?