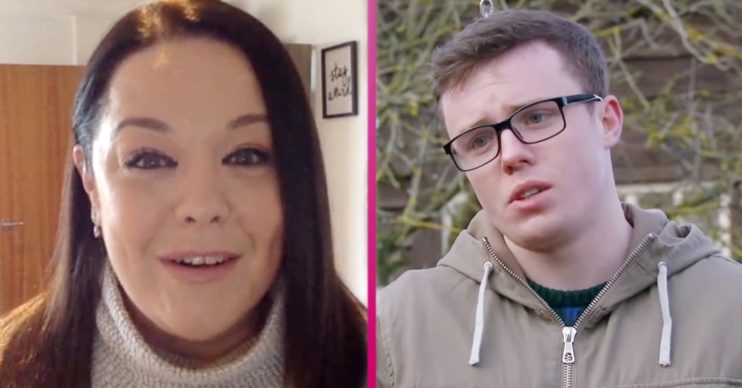 Emmerdale star Lisa Riley was left in hysterics when she forgot the name of her soap son, Vinny.

Currently Lisa’s alter ego, Mandy, has been left in an awkward situation after her ex-boyfriend Paul, who abandoned her and Vinny years before, came back into their life.

Paul and Vinny are currently plotting to get Mandy and Paul back together, but will it work?

Speaking to Christine Lampard on Lorraine about the storyline, she said: “It starts with a bit of temptation, a bit of comedy, but Paul’s got a very dark side. And we’re going to see this over and over and over beginning tonight.

“It’s going to be going on for a long time this storyline, we’re just loving it, it’s great. Working with Bradley who plays, who plays… what’s my son called?”

Lisa then burst out laughing and Christine chimed in saying: “Vinny.”

Lisa then responded saying: “Vinny! Honestly I’ve been given so many scripts.”

Emmerdale Lisa Riley: What’s next for Mandy, Paul and Vinny?

In tonight’s episode of the ITV soap (Wednesday, August 26) Mandy believes Liv is coming over for dinner with Vinny.

However when Liv cancels, Mandy and Paul end up eating together.

Speaking about the scenes, Lisa said: “We see her soften tonight and there is also a bottle of red wine involved.

“And then obviously we realise that it’s not what it’s supposed to be, it’s a setup because Vinny and Paul want Mandy to be a family together and she gets very upset when she realises that obviously Vinny is heavily involved with this lie. Because she wants to trust him.”

Lisa also confirmed the storyline will be continuing for some time as she has signed a new contract at the soap.

Have you been enjoying Mandy, Vinny and Paul’s storyline? Leave us a comment on our Facebook page @EntertainmentDailyFix and let us know what you think of this story.