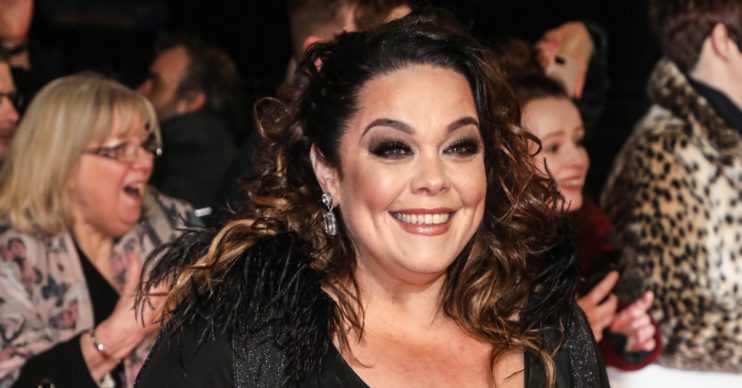 Lisa showed This Morning around the ITV set in Leeds

Emmerdale star Lisa Riley has given fans a behind the scenes look at how filming works on the soap.

On This Morning, they did a segment which showed Lisa, who plays Mandy Dingle on the ITV soap, giving fans a glimpse at all the new changes.

At the beginning of the clip, Lisa showed how the days start at the ITV building in Leeds.

The first thing that happens is someone with an infrared thermometer comes to check people’s temperatures before they enter the building.

She then showed they have a hand sanitiser station before entering the one-way system. The system is also colour-coded, so staff and guests can navigate through the ITV building.

As Lisa was working with the blue crew, she took guests to have a look.

She explained, as part of the new regime, they have minimal crew on set. In the office were three crew members who work on hair and make-up and wardrobe. They use a monitor to check whether there are any wardrobe or make-up errors.

If there are any issues, they can use a walkie-talkie to let people on set know.

As the cast are now doing their own make-up, Lisa explained if they need to get anything such as eyelash glue, she needs to go full circle around the building to get back to her dressing room.

Mandy then visited the various inside sets, which have been constructed in a huge hangar-like warehouse.

In studio six, viewers got to see a glimpse of David’s shop before getting a look at the famous Dingle house, Wishing Well Cottage.

Explaining the markings on the floor, Lisa said: “Everything has been marked on the floor, the blue area is for the director to direct, to do what he does with us, to the cast. And the cast line is here, the yellow and black zone.”

She explained the director will set up his camera and then watch the actors from a monitor.

Lisa gave fans a look at one of the cameras used to film the soap, showing it had perspex glass to keep cast and crew safe.

The actress also introduced viewers to a woman named Val, who uses a pole to check people are keeping two metres apart.

Although actors are to always remain two metres apart, perspective and angles can make it look like they are standing closer than they’re meant to.

Did you see Mandy’s behind the scenes segment on This Morning? Leave us a comment on our Facebook page @EntertainmentDailyFix and let us know what you think of this story.